Horsetail Fall is a small, ephemeral waterfall that flows over the eastern edge of El Capitan in Yosemite Valley. 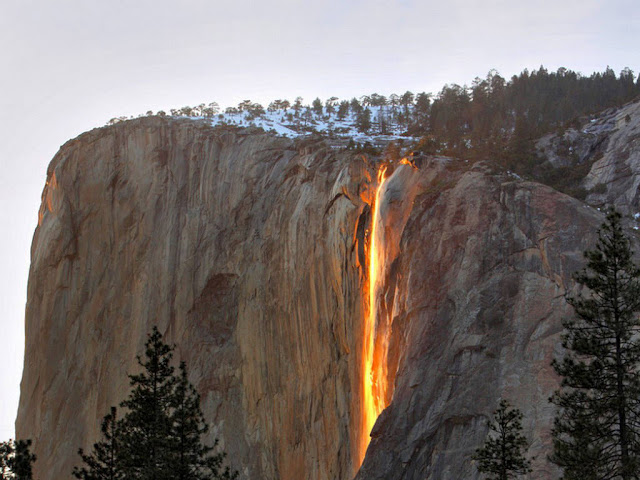 Yosemite National Park covers nearly 1,200 square miles of mountainous terrain in the Sierra Nevada of California. From high peaks and deep canyons to ancient forests and quiet meadows, the diversity of the world is on display here. At Yosemite you can see the tranquility of the High Sierra, the power of glaciers, giant sequoia groves, thundering waterfalls, clear streams and much more. Designated a World Heritage Site in 1984, Yosemite is also home to hundreds of wildlife and plant species. Two Wild & Scenic Rivers, the Tuolumne and Merced rivers, begin in the park and flow west to the Central Valley. Visitors experience the park's 800 miles of hiking trails and 282 miles of road.
Visitors fall in love with the park's many waterfalls, specifically 2,425-foot Yosemite Falls that ranks as the tallest in North America, flowing down into the scenic Valley meadows. Hikers take notice of the enormous granite mountains from the 8,842-foot Half Dome to the 13,114-foot Mt. Lyell-Yosemite's tallest peak. Glaciers, which John Muir sought out in California as well as Alaska, add into the mix with the Maclure and Lyell still intact.
"It is by far the grandest of all the special temples of Nature I was ever permitted to enter." —John Muir