A galaxy called PGC 1000714 has been discovered 359 million light years away from Earth. 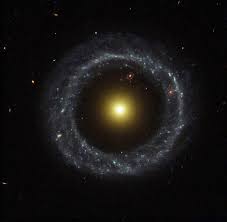 Its central core is circled by two rings, making researchers suspect that it is one of the very rare Hoag-type galaxies.

Most galaxies, such as the Milky Way, look like a disc of stars, but PGC 1000714 is strikingly different, with distinct rings of stars. The outer and inner belts of the galaxy are blue and red, respectively. The inner red ring surrounds a central body of matter.
The different ages of the two rings suggest that the galaxy went through two distinct formational periods – the first to form the inner ring and the second, the outer ring. This double-ring feature sets it apart from other Hoag galaxies – themselves extremely rare – which usually just have one ring. These galaxies are named after the astronomer Arthur Hoag, who first observed the ringed galaxies in 1950. The first ringed galaxy is called Hoag's Object and is about 100,000 light years across.
"Less than 0.1% of all observed galaxies are Hoag-type galaxies," says Burcin Mutlu-Pakdil, a graduate student at the Minnesota Institute for Astrophysics, the University of Minnesota Twin Cities and University of Minnesota Duluth, and author of a paper published in the journal Monthly Notices of the Royal Astronomical Society. 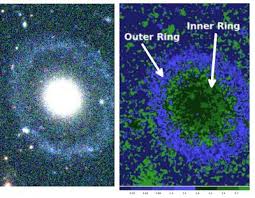 "From these initial single snapshots in time, it's impossible to know how the rings of this particular galaxy were formed," she says.
The researchers monitored the galaxy across many different wavelengths in order to detect the colour and age of the stars in the galaxy.
They found that the outer ring was just 0.13 billion years old, but the inner ring was as old as 5.5 billion years.
"We've observed galaxies with a blue ring around a central red body before, the most well-known of these is Hoag's Object. However, the unique feature of this galaxy is what appears to be an older diffuse red inner ring," says study co-author Patrick Treuthardt, an astrophysicist at the North Carolina Museum of Natural Sciences.
"Whenever we find a unique or strange object to study, it challenges our current theories and assumptions about how the Universe works," he says. "It usually tells us that we still have a lot to learn."
Αναρτήθηκε από ΕΛ