ASASSN-15lh. The Brightest Supernova Ever Seen.


Massive stars are not known for going gentle into that good night, but the newly discovered supernova ASASSN-15lh is taking things to a whole new physics-defying level. 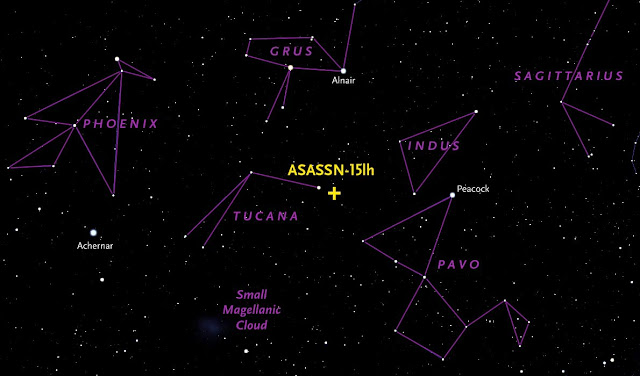 According to a new study published today in Science, ASASSN-15lh shone with the light of 570 billion Suns during its peak last June (the equivalent of over 20 times the output of the entire Milky Way galaxy) making it at least twice as luminous as the next brightest supernova in the books.


Put simply, this thing is the heavyweight champion of supernova—catastrophic explosion of stars at the end of their lifetimes—and it challenges everything we know about them.
“The moment when it was confirmed that ASASSN-15lh was such a spectacular explosion from the SALT [South African Large Telescope] spectrum, I was very excited,” Subo Dong, an astronomer at the Kavli Institute at Peking University and the lead author of the new research, told me over email.
But for Dong and his colleagues, the find turned out to be as baffling as it was thrilling. ASASSN-15lh belongs to a special category of phenomenon called super luminous supernovae (SLSNe), or hyper novae, which are hundreds of times more energetic than regular supernovae, and much rarer. Only a few dozen examples have been detected.
Astronomers still aren’t sure what powers these extraordinary bursts, especially on the record-breaking levels observed in ASASSN-15lh. But one popular theory suggests that they can be chalked up to a special class of neutron stars known as magnetars.

In addition to having one of the coolest names in astronomy, magnetars are mind-boggling objects thought to be so dense that a spoonful of their material would weigh 200 billion pounds Their magnetic fields are roughly 1,000 trillion times more powerful than those generated by Earth, resulting in crustal star quakes that create blasts of highly energetic X-ray and gamma ray light. These objects can also spin very rapidly, rotating once every millisecond in some dizzying cases.
All of these extreme properties add up to magnetars being solid candidates as the engines of a hyper novae because they have so much potential energy. The idea is that as magnetars spin down, or slow their rotational period, energy is transferred into an envelope of magnetized wind and ejected material surrounding them. The effect is like the Northern Lights on steroids—an incredibly energetic thermal interaction that produces massive bursts of optical energy.
But there’s a big hole in this theory, because previous research suggests that a magnetar-induced hyper nova can only produce so much energy before it starts to infringe on the laws of physics, and that number is easily exceeded by ASASSN-15lh.
“Some of my colleagues think that it is plausible to push the magnetar model parameters to an extreme to interpret it—in that case, this would be a magnetar rotating at the maximum allowed spin speed by physics, that has the strongest magnetic field for any neutron stars people have observed, and also needs to radiate at 100 percent efficiency,” Dong explained.
That’s a lot of perfect conditions to hit, which throws the magnetar hypothesis into doubt, not just in the case of ASASSN-15lh, but potentially for all super luminous supernova.
To that point, another explanation put forward by Dong’s team is that the decay of unusually large stockpiles of nickel into the isotope nickel-56 (Ni-56) is driving the insane radiance of ASASSN-15lh.
This highly luminous nickel decay is well-observed in normal supernovae, but has yet to be understood in relation to explosions on the scale of hyper novae. Fortunately, ASASSN-15lh provides an excellent opportunity to investigate this possibility. Over the coming months, astronomers will attentively watch the supernova as it expands, to see if the process exposes emission lines that suggest nickel decay is the source of its brightness. They should know within the year. 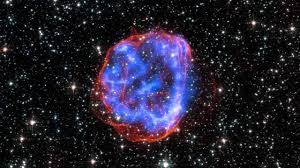 At the moment, ASASSN-15lh remains a perplexing mystery, with an outsized grandeur that seems to strain against the hallowed physical rules of the universe. The proverbial scientific wisdom is that extraordinary claims require extraordinary evidence, but events like this seem to turn that idea on its head. What astronomers have uncovered is extraordinary evidence, and extraordinary claims will be required to explain it.
“In the history of science, great mysteries have inspired new insights into nature and spurred new observational and experimental efforts to push the boundary of the known,” Dong told me. “I hope the discovery of ASASSN-15lh will motivate people to re-examine the thinking’s behind the supernova explosion theories and come up with fresh ideas. ASASSN-15lh is a sample of only one, and I wish more exciting discoveries like it will follow in the near future.”