A STRANGE fragment of metal found near the scene of the notorious 1947 Roswell UFO crash site cold hold vital clues to solving the mystery incident.

The scrap, found by best-selling author Ben Mezrich, is awaiting to be tested, he revealed in his new book.
He arrived at the site to research his new book - The 37th Parallel – which investigated the UFO road of the same name.


The 37th Parallel is the 37th north parallel in latitude and part of it has become known as the Paranormal Highway due to the high number of UFO sightings and unexplained animal mutilation cases.


It is also said to house many US military bases and American Indian holy sites.


The Roswell case has been at the heart of the UFO scene since July 1947 when the military sensationally announced in a press release it had found the remains of a crashed flying saucer in the desert nearby.


But the following day it retracted the statement, saying it was in fact a damaged US Air Force air balloon.


Witnesses later came forward to say there had been alien bodies within the "crashed craft", which along with the wreckage were then taken to the mysterious top-secret Area 51 military base in Nevada. 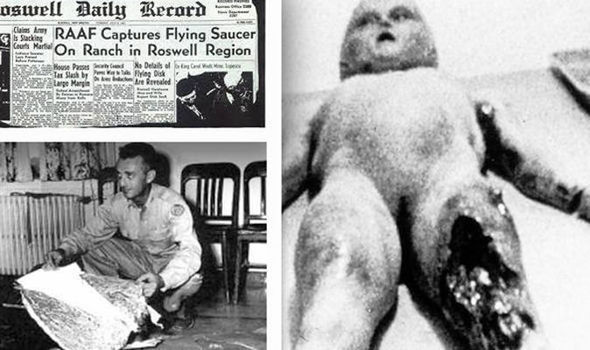 The book by Mr Mezrich looks at the the array of UFO sightings along the parallel, including the infamous Roswell case.


It charts the work of Chuck Zukowski, an UFOlogist who has investigated cases along the parallel, which takes in the southern ridge of Colorado, New Mexico, Utah and Arizona, for several decades.


Mr Mezrich, who also wrote The Accidental Billionaires, the best-selling book upon which the movie The Social Network is based, admitted to being a total sceptic before researching the book.


He said: "I'm from a family of scientists and a skeptic.


"I assumed most of the UFO community was crazy."


But Mr Zukowski, a part-time microchip engineer and former sheriff's deputy, has convinced him otherwise.


Mr Mezrich added: "I believe that something happened at Roswell."


In 2002 Mr Zukowski, who has spent hours scouring the area, found a strange triangular piece of metal near the 1947 crash site.


More recently, he sent a fragment of it to the laboratory of Bigelow Aerospace, and is still awaiting conclusive results on what it is composed of, according to the book.


The 37th Parallel: The Secret Truth behind America's UFO Highway, published by Atria Books, is available on Amazon.