Viral NASA Photographs Show Mysterious Blue Sphere in Front of the Sun – Was it the Prophetic Blue Kachina?

On November 17, NASA’s STEREO satellites photographed a giant blue sphere moving in front of the Sun.

The strange images quickly went viral and the internet is full of theories trying to explain the highly unusual occurrence. Is the Blue Star Kachina finally here?

The mysterious image was first uploaded to Facebook by Pamela Johnson and immediately received the attention it deserved. Intrigued by the appearance of the sphere, she dug deeper and quickly made some troubling findings. Although NASA’s archives contained images of the enigmatic sphere taken on November 17, several frames were missing from the feed; images taken on November 15 and November 16 were nowhere to be found. Does this scream ‘NASA cover-up’ or not?
One YouTube user commented:


“I have downloaded the images from SECCHI HI1 and this is strange. This ‘anomaly’ can only be seen on images from 11.17. But there are several missing frames both before and after its appearance.”


The STEREO (Solar Terrestrial Relations Observatory) satellite array is officially meant to study the “structure and evolution of solar storms” but in this case it was able to provide us with what some call definitive proof of a massive and unknown presence in our solar system. What’s more intriguing is the fact that the image was uploaded to NASA’s science center servers without any accompanying explanation.


Furthermore, as Pamela Johnson pointed out, NASA tried to cover their mistake by trying “to use EUVI 171 images of the Sun to hide the sphere.” Not good. 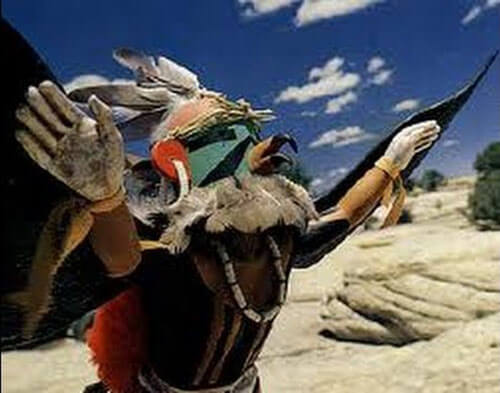 When things started going south, NASA forwarded an official explanation that failed to sway the belief of conspiracy theorists:


“On rare occasions, the SECCHI image processor on board STEREO becomes overloaded, and produces corrupted images,” NASA explained. “Because the images from the Heliospheric Imager (HI) telescopes are built up from a large number of exposures added together, this sometimes results in ‘double exposures,’ where data from several telescopes appear in the same image.”


Not taking NASA’s word for it, the internet floated other explanations out there. UFO hunters are convinced the blue sphere was actually an enormous UFO and due to its sheer size, it could have been responsible for the missing frames by creating an electromagnetic anomaly. When it left the area, the satellites resumed their normal activity.


“Whether the object is one of the giant extraterrestrial or interdimensional spacecraft, which are accessing our solar system, using the Sun as a Stargate or an unknown celestial body like the famed planet Nibiru, it is clear what happened on the 17th was not the result of an equipment failure,” one conspiracy theorist wrote.


Others believe the strange sphere was actually the result of malevolent human beings, an expression of the infamous Blue Beam Project. This perverse and apocalyptic-inclined venture –if real– would seek to cause mayhem among Earth’s population by instilling fear and simulating the thing we all fear most: doomsday. If this theory is correct, one logical conclusion would be that NASA is either in cahoots with or being run by the NWO.


Other theories attempting to explain the blue sphere mention Nibiru or an enormous stargate; both possibilities are ominous and disconcerting. But there could be another meaning behind this incident and, as far as I know, it hasn’t been forwarded yet.


An ancient Hopi prophecy states that “when the Blue Star Kachina makes its appearance in the heavens, the Fifth World will emerge.” It also speaks about the manifestation of nine signs foretelling this world-changing event. Could it be happening right now?


The Hopi (meaning Peaceful People) have been living in northeastern Arizona since they can remember and are believed to be descendants from cultures to the south, east and north. The Anasazi are forefathers of the Hopi, which creates a direct link to the ancient Aztec culture.   Though many civilizations around the globe support religious beliefs of “white gods” descending from the sky, the Hopi tribe believe their ancestors came from within the ground.


One of the many Hopi myths specifically describes strange beings who reside inside the heart of the Earth and are called the Ant People. Drawings displaying the Ant People firmly resemble illustrations found in modern grey alien encounter reports. Another connection exists between the Hopi’s Ant People and the Mesoamerican legend of Quetzalcoatl. It is believed that the Ant People had helped the “White God” discover corn on a mountain packed full of grain and seeds.


The Hopi believe the Star People and their star knowledge will return at the end of the current period of time, as they have in past times. Their entire mythology is built upon the assumption that the world goes through successive cycles separated by cataclysmic events. According to their legends, at the time of the Blue Kachina, the Star People retreated to the heart of the Earth, seeking shelter during the world’s destruction. Passed down from generation to generation, their intriguing mythology describes the event:


First, the Blue Kachina would start to be seen at the dances, and would make his appearance known to the children in the plaza during the night dance. This event would tell us that the end times are very near. Then the Blue Star Kachina would physically appear in our heavens which would mean that we were in the end times.”


When the First World was destroyed, people returned from the ground to the outer world to live as ants for the continuation of the Second World. The Third World tells of an advanced civilization with “flying shields” and wars between far – off cities ultimately destroyed by terrible floods, narratives very similar to those found in Babylonian mythology. 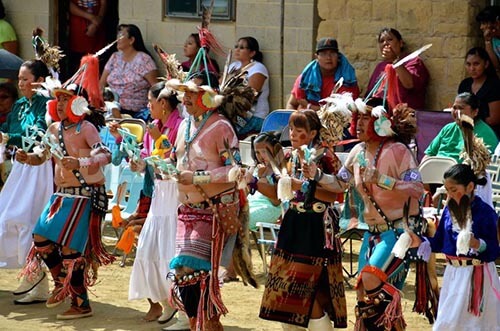 HOPI ELDER NEXT TO A DEPICTION OF A FLYING SHIELD

Hopi Indians are now wardens of the Fourth World in exchange for the benefit of living on Earth. They consider the coming of the Fifth World is near and will begin when members of the Fire Clan return.


“In the final days the Blue Star Kachina will come to be with his nephews and they will return the Earth to its natural rotation which is counterclockwise. Not far behind the twins will come the Purifier – The Red Kachina, who will bring the Day of Purification? On this day the Earth, her creatures and all life as we know it will change forever.”


The legend of the Blue Kachina also corresponds with Mayan prophecies and the Planet – X theory, suggesting an interdependence between Hopi assumptions and those of the Mayan civilization. Furthermore, another link is formed between the Hopi legend of Pahana and the Mesoamerican myth of Quetzalcoatl, connecting the Hopi to certain North American Indian cultures who worship the Horned/Feathered Serpent. Other ancient mysteries tend to relate with many genesis stories and religious beliefs of other archaic civilizations in both South and North America.


The Hopi claim that four stone tablets of creation exist. In ancient times, these tablets were given to them by Massau – The Guardian of the Underworld, who requested that the tablets be kept until a number of signs were fulfilled at the end of the fourth world and the beginning of the fifth. When the signs appeared, the Hopi were advised to reveal the tablets and their prophecies to the world regarding the purification of Earth.


The Nine Signs of Destruction were described by author Bob Frissell in Something in this Book is True. The signs were described to him in 1958 by a Hopi elder named White Feather.


This is the First Sign: We are told of the coming of the white-skinned men, like Pahana, but not living like Pahana, men who took the land that was not theirs. And men who struck their enemies with thunder.


This is the Second Sign: Our lands will see the coming of spinning wheels filled with voices. In his youth, my father saw this prophecy come true with his eyes.


This is the Third Sign: A strange beast like a buffalo but with great long horns will overrun the land in large numbers. These White Feather saw with his eyes.


This is the Fourth Sign: The land will be crossed by snakes of iron.


This is the Fifth Sign: The land shall be crisscrossed by a giant spider’s web.


This is the Sixth Sign: The land shall be crisscrossed with rivers of stone that make pictures in the sun.


This is the Seventh Sign: You will hear of the sea turning black, and many living things dying because of it.


This is the Eighth Sign: You will see many youth, who wear their hair  long like my people, come and join the tribal nations, to learn their ways and wisdom.


The Ninth sign, as White Feather told Frissell, is a herald of destruction: “You will hear of a dwelling-place in the heavens, above the Earth, that shall fall with a great crash. It will appear as a blue star.
Very soon after this, the ceremonies of my people will cease. 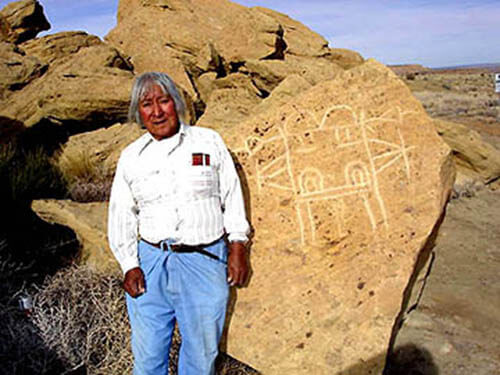 IS THIS THE BLUE STAR KACHINA?

Many believe the first eight signs have already been fulfilled. The First Sign can be interpreted as the arrival of Europeans on the North American continent. The Second is a reference to the early exploration of America, using the wagon as a primary means of locomotion. The next three Signs point to other European influences, such as the arrival of cattle, and the emergence of railroads and telephone lines.


The “rivers of stones” mentioned in the Sixth Sign can only be roads and highways. The Eight Sign is pretty self-explanatory and encapsulates the symptoms of worldwide pollution. The Hopi believe the increased toxicity levels in the Earth’s oceans are a clear indication that the second-to-last sign is already upon us.


Is this yet another wrongfully-interpreted prophecy, a metaphoric cow milked to exhaustion by authors with no other interest than to sell their books? Or are the peaceful Hopi really the keepers of ancient sacred knowledge, passed down from a time when man walked alongside the gods?


The first eight Signs have come and passed and the Hopi are waiting for the Blue Kachina as a signal that the current world is nearing its end. If they were to see the recent NASA image, what would they say?