Imagine you are scuba diving.

Now imagine that the water is completely, totally clear, with practically no floating particles, silt, or any other material that would impede the crystal clear visibility you now enjoy.
It seems you are not swimming, but rather soaring through the air, unfettered by gravity or the rocky ground below. Now imagine that you come across a sight that you know must be odd because despite being lost in the sensation of flight, a part of you still remains aware that you are still in fact underwater. You might blink your eyes in bewilderment at the unearthly sight that lies before you but no amount of blinking will erase it from existence.
It is there, 90ft below the surface of the water and as real as you are; a swirling, mist-like river meandering along the bottom, complete with trees jutting from its depths. You have come across the beautiful and haunting underwater river of Cenote Angelita, in Yucatan, Mexico. 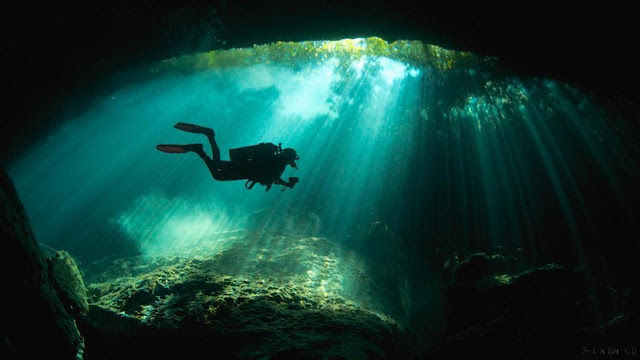 Angelita means “little angel” in Spanish and is what is called a cenote. A cenote is a sinkhole where limestone bedrock has collapsed and exposed groundwater below or accumulated rainwater over large amounts of time. These pools of water can measure tens of meters in diameter, and were often used by the ancient Mayans as a water source, as the Yucatan Peninsula has no rivers and few lakes. They were also sacred places for the Mayan people, with some of them thought to be gateways to the afterlife and thus the location of various rituals and rites. They have a great deal of archeological importance, since it was common practice for the Mayans to throw valuable objects into them as part of their rituals, whereupon they settled to the bottom and remained in a remarkably well-preserved state.
Archeological excursions into cenotes have turned up rare relics, golden artifacts, and even human skeletons from the time of the Mayans lying at the bottom.


Cenotes are renowned for their remarkably crystal clear water, due to the water mostly coming from rain trickling down from above through the rocks, where it is naturally filtered and therefore retains nearly zero particulates. They are also known for their often complex systems of flooded, underwater caves, many of which are unexplored and can stretch for incredibly long distances. Some of the cenote caves have been recorded as extending for 100 km (62 miles) or more. Due to the fantastic visibility and large number of extensive, unmapped caves, cenotes are popular destinations for cave divers, who come from around the world to dive within them. 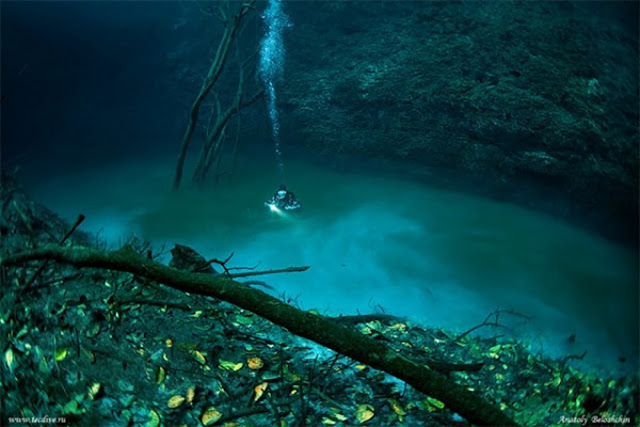 The Cenote Angelita is located on the east coast of Mexico’s Yucatan peninsula, not far from the ancient Mayan city of Tulum. The cenote itself is a cavern that was formed due to a rock collapse long ago, and it is somewhat unique in that it has slowly trapped both saltwater from the nearby sea and freshwater from the rain within a massive subterranean pool that measures a dizzying 55m (180ft) deep. What makes Cenote Angelita special is not even its size, but rather the mystifying, surreal sight that lies in wait 30m (100ft) down; what appears to be an unearthly, greenish river meandering along the bottom.


This mesmerizing phenomenon is not in fact a real river in the strict sense, but rather an illusion created by the cenote’s unique water composition. Since the cenote integrates both freshwater and saltwater, the different densities of the two causes the freshwater to float up to the top layer and for the saltwater to sink to the bottom, causing vertical stratification between the two.
The interface between these two layers forms what is called a halocline, which is basically where there is a very sharp change in salinity over a small range of depth. Contained within this halocline, right where the saltwater meets the freshwater, is suspended a thin layer of misty hydrogen sulfate, which is often created when the bacterial breakdown of organic matter happens in a low oxygen environment and dissolves. 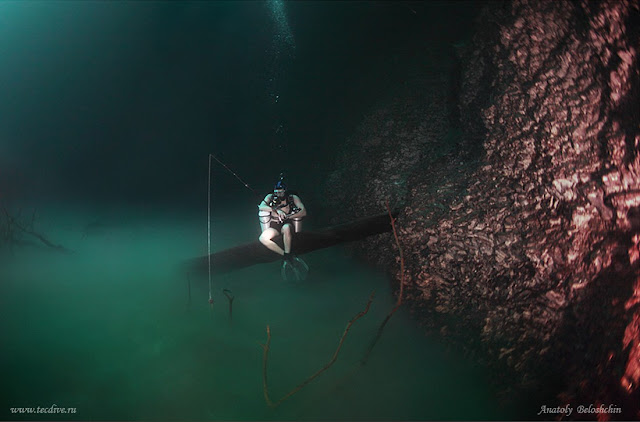 The layer of hydrogen sulfate has a striking visual contrast with the clear water around it and is heavy enough to move independently of the water around it, thus appearing to follow its own current as if it is a river flowing underwater. The illusion is made even more complete by the presence of leaves and small branches perched within the layer atop rubble from when the limestone that formed the cenote collapsed, creating the effect that they are floating on water or even washed up on its “banks.” There are even sunken trees penetrating through the layer to emerge as if from underwater. Divers can even swim through the layer, which is about 6 feet deep, to the other side, where clear saltwater awaits and they can look up at the river flowing above them.


The overall effect is a somewhat jarring, yet achingly beautiful and majestic sight that has drawn cave divers from far and wide to experience the unreal phenomenon for themselves. The sight of this bizarre swirling river contrasted with the totally clear water around it is truly stunning. One only has to look at some of the breathtaking photos to really become entranced and immersed in this mystical underwater landscape. If one did not know these were taken underwater, they might think they were looking at a real river. The presence of divers ethereally floating above the “bank” only adds to the enchanting, magical quality of this place. 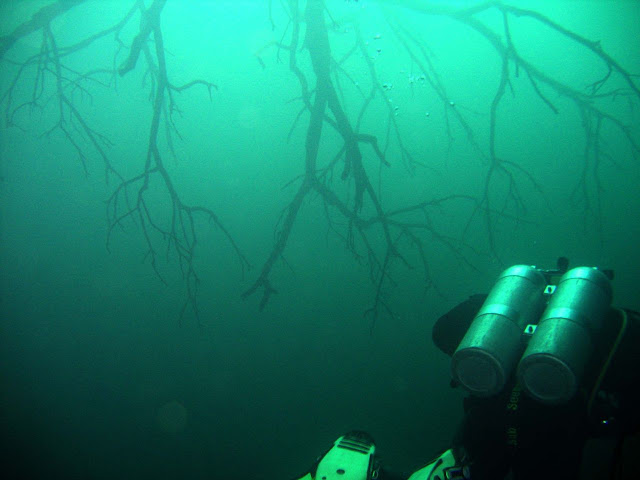 Have you booked your ticket to Mexico yet? Are you already packing your gear? If you don’t have one, are you finally convinced to get that scuba diving license? Although the attraction of diving here is certainly apparent, it is recommended only for very advanced divers, as the caves and the depths involved pose great dangers for novices. Anyone who is qualified and brave enough to take the risk in order to see this magical sight can do so through several diving outfits that offer tours to the cavern.
For those without the means to make the journey themselves, perhaps they can take comfort enough in just knowing that in this world of ever increasing environmental destruction, water pollution, and urban sprawl, a place as pure, clean, and stunningly gorgeous as this still exists out there.