It is known as the 'jacuzzi of death' - and is one of the oddest places on the planet. 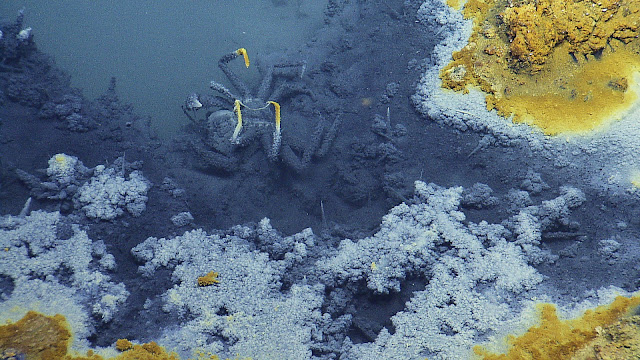 Researchers first discovered a massive brine pool under the Gulf of Mexico in 2014 using a robosub.
Now, they have returned to create the first high resolution map of the area - and say it could hold the key to finding life on other planets.


'On the last leg of these seafloor hydrocarbon community investigations, we focused on a larger brine pool dubbed the 'Jacuzzi of Despair,' in reference to its warm temperature (19°C) and high salt content—which can be fatal to many macro fauna unlucky enough to fall in (we observed large dead isopods and crabs that had been preserved along the edge of the brine pool),' the researchers wrote in Oceanography.


'This crater-like, circular, brine-filled pool rose 3 m above the surrounding seafloor, and brine was spilling out on one side in a spectacular 'waterfall.'

'It was one of the most amazing things in the deep sea,' Erik Cordes, associate professor of biology at Temple University who discovered the site along with several colleagues, and published a report on the findings in the journal Oceanography, told Discovery News after a previous visit to the area.


'You go down into the bottom of the ocean and you are looking at a lake or a river flowing.


'It feels like you are not on this world.' 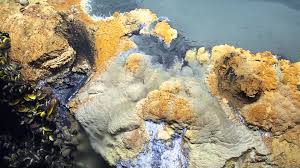 Cordes - who studies deep-sea corals - and others first found the formations in 2014 using a remotely-operated underwater robot called Hercules.


They returned the following year with the three-person research sub Alvin to get a closer look.


Now, their latest study has been published.


The team retrieved some samples of microbial life that are adapted to handle the high salinity and low oxygen levels of the brine pool.


Cordes believes that these creatures could resemble life on planets in our solar system, or beyond.
'There's a lot of people looking at these extreme habitats on Earth as models for what we might discover when we go to other planets,' Cordes told Seeker in May.


'The technology development in the deep sea is definitely going to be applied to the worlds beyond our own.'
One of the main purposes for revisiting this brine pool was to conduct a high-resolution mapping survey of the area.


'Below this layer, we found dense, hydrocarbon-charged, fluidized mud at a temperature of 19°C,' the team said.


'The sampling line and CTD were lowered ~19 m into the pool but never reached a hard bottom—shedding new light on the nature of these 'bottomless' brine pools.' 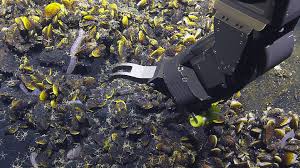 The preliminary analyses confirmed that the brine pool was saturated with methane.


The team now hope to return to create 3D maps.


'Ongoing analysis of this experimental spectral data, together with high-resolution three-dimensional mapping, will provide a more detailed picture of the physical and biogeochemical processes at work in these extreme environments.


'This information helps us to estimate the amount and extent of microbial processes occurring in such environments and to better understand how these ecosystems are initially formed, how they change over time, and what controls the differences among them that we observed on these and other expeditions.'