Astronomers will present results from a unique Europa observing campaign that resulted in surprising evidence of activity that may be related to the presence of a subsurface ocean on Europa.

The suspense is killing. What have they found? Oceans? Life? Europaen Ichthyosaurus? Monoliths? Messages? Warnings?


One cannot help but listen to “Also Sprach Zarathustra" by Richard Strauss from the movie 2001 A Space Odyssey to get a sense of awe and some goosebumps.


Although, the announcement is more likely to be that of confirmation of liquid water and oceans underneath its icy surface. Perhaps, detection of some more water vapor plumes.

Europa is the sixth-closest moon of Jupiter, and the smallest of its four Galilean satellites, and the sixth-largest moon in the Solar System. Europa was discovered in 1610 by Galileo.


Astrobiologists regard Europa as one of the solar system's best bets to host alien life. The 1,900-mile-wide (3,100 kilometers) moon, slightly smaller than our moon, harbors a huge ocean of liquid water beneath its icy shell; it may hold twice as much water as Earth; furthermore, astronomers think this ocean is in contact with Europa's rocky mantle and is subject to tidal heating, making possible all sorts of interesting chemical reactions.


In December 2013, NASA reported the detection of "clay-like minerals" (specifically, phyllosilicates) on the icy crust of Europa. In addition, the Hubble Space Telescope detected water vapor plumes similar to those observed on Saturn's moon Enceladus, which are thought to be caused by erupting cryogeysers. 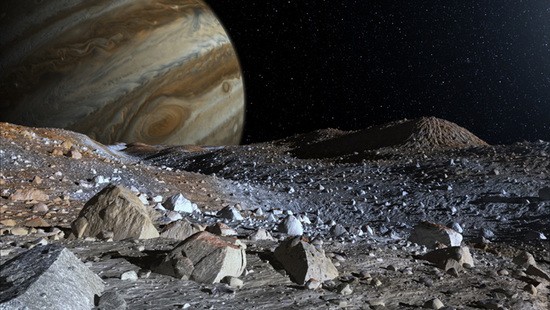 Jupiter's internal magnetic field is generated by electrical currents in the planet's outer core, which is composed of liquid metallic hydrogen. Volcanic eruptions on Jupiter's moon Io eject large amounts of sulfur dioxide gas into space, forming a large torus around the planet.
Jupiter's magnetic field forces the torus to rotate with the same angular velocity and direction as the planet. The torus in turn loads the magnetic field with plasma, in the process stretching it into a pancake-like structure called a magnetodisk. In effect, Jupiter's magnetosphere is shaped by Io's plasma and its own rotation, rather than by the solar wind like Earth's magnetosphere.  en.wikipedia.org/...


Europa, along with the three other Galilean moons (Io, Ganymede and Callisto), orbits within Jupiter’s radiation belts. Radiation in the form of high-energy electrons and ions continuously bombard the top layers of Europa’s icy crust. The ions from the belt can penetrate about a millimeter into the ice. Electrons reach roughly a centimeter down, but they also emit high-energy photons that can go as far as a meter deep. Regardless of the type of radiation, these high-energy particles will rip electrons off of molecules, thereby “oxidizing” molecules on the surface.


This chemical destruction ironically could be vital to any potential life below. The ocean is believed to contain little to no dissolved oxygen (known as a “reducing environment”). In such an oxygen-poor bath, life could harvest chemical energy by combining surface oxidants with chemicals in the ocean that react with them (so-called “reductants”). The radiation produces free Oxygen from surface ice as well as other oxidants such as hydrogen peroxide. Tidal forces have been proposed as a mechanism to migrate some of this free Oxygen to deeper waters.


The radiation belts are rotating around Jupiter faster than Europa does. This results in the radiation predominantly striking the trailing hemisphere of the moon—which is always the same portion of the moon since Europa is locked in a synchronous orbit around Jupiter. Moreover, there is a constant stream of micrometeorites landing on the leading hemisphere. These tiny rocks form a regolith layer up to 3 meters thick that could protect oceanic material from incoming radiation. This provides a higher probability of finding complex molecules and perhaps life on the leading hemisphere of Europa.
See more at: www.astrobio.net/... 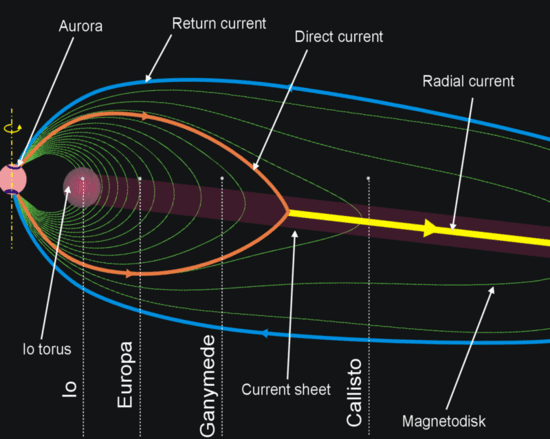 Meanwhile, NASA’s planned mission to Europa, known as the Europa Clipper, is making progress and calls for a spacecraft to be launched to Jupiter in the 2020s, arriving in the distant planet’s orbit after a journey of several years. The Europa Clipper would not orbit Europa, but instead orbit Jupiter and conduct 45 low-altitude flybys of Europa during its envisioned mission. The probe would carry an ice-penetrating radar, short-wave infrared spectrometer, topographical imager, and an ion- and neutral-mass spectrometer. During the 45 flybys, the spacecraft will image the moon's icy surface at high resolution and investigate its composition and the structure of its interior and icy shell and help select sites for a future lander.