The Ancient Underwater Pyramids in Wisconsin

Rock Lake in southern Wisconsin, dubbed “North America’s Most Controversial Underwater Archaeological Discovery of the 20th Century.” The first settlers of Lake Mills, Wisconsin in the 1830s heard stories from the Winnebago Indians about “stone teepees” submerged in nearby Rock Lake. 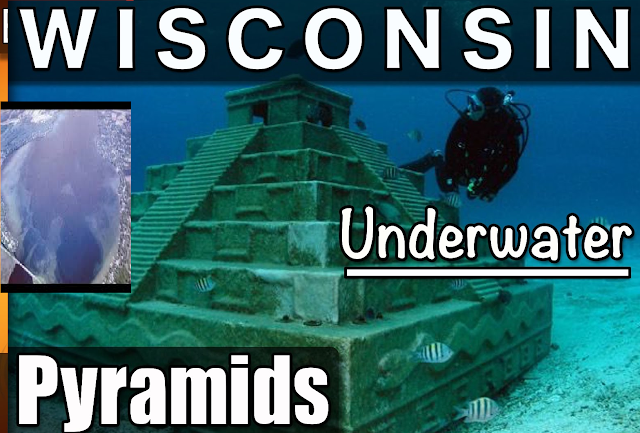 Over time, especially during periods of extreme drought, fishermen reported seeing large geometric structures on the lake floor. The few times archaeologists came to investigate, they couldn’t locate the structures and dubbed the underwater features a hoax.
At one point the mayor of Lake Mills spotted one of the pyramids himself and the technological search was on. 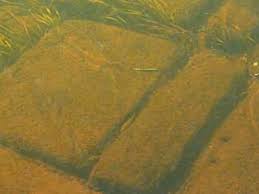 Aerial photos, side boat sonar scans, and underwater divers eventually charted a complex of at least nine different stone structures, including: two rectangular pyramids, several stacked–rock walls, two “Stone Cone” areas, a conical pyramid, and a large “Delta Triangle” structure. There is also a part of the lake floor that supposedly features Indian mounds similar to Aztalan, a prehistoric Mound Builder site located only two miles away.
The largest underwater structure, dubbed the Limantis Pyramid, has a length of about 100 feet (30 m), a base width of 60 feet (18 m), and a height of 24 feet (7.2 m), although only about 12 feet (3.6 m) protrude from the silt and mud of the lake floor. The Limantis Pyramid is a truncated tent–like pyramid, built largely out of rounded black stones. The cap stones on the two rectangular pyramids are squared rather than round. Small amounts of a plaster coating are still detectable, similar to the coating used on the Aztalan stockade walls. ​Murky dive conditions usually make the ruins hard to locate, but scuba enthusiasts continue to report their presence when the lake is clear. So what are stone pyramids doing at the bottom of a Wisconsin lake?
It seems the ancient Aztalan people constructed a dam at the feeder stream to control water flow into Rock Lake. Apparently they kept the wide lake basin dry but could fill it at will. It is anyone’s guess if the structures were funerary, part of a larger construction, or used for ritualistic ceremonies. 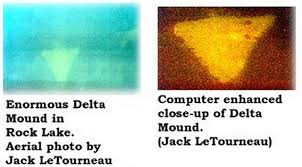 The southern end of Rock Lake near Aztalan State Park in Wisconsin is the site of an explainable series of rock formations that has baffled everyone who has seen them for centuries.
When European settlers first took up residence in the area, Native Americans told them of rock teepees located on the lake’s floor. In 1900, their existence was verified when local duck hunters caught site of the massive monoliths from their boat. Entirely submerged, the structures are 30 feet high and 100 feet long, and are conical in shape.​
Explanations for the underwater stone pyramids vary. Some say that they are simply natural glacial formations, while others say that they are manmade, and were constructed by an ancient civilization before the area was flooded with water. Proponents of this theory point to the archaeological evidence found nearby in Aztalan State Park, where the Mississippian Indians constructed pyramidal mounds over 1,000 years ago. 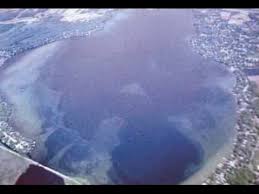 The following passage comes from the Rock Lake Research Society, an organization dedicated to the investigation and documentation of these enigmatic structures:


“1900: Two local residents, the Wilson brothers, spot mysterious structures underwater while duck hunting. Unusual clarity exists as it is late fall and rainfall was low for the year dropping water levels below normal. The two men advise the other residents of Lake Mills and dozens of people in boats converge on the lake to witness the underwater structure. Several boys dive a short distance and touch the pyramidal structure. It is described as a long tent-shaped structure of undetermined height and approximately 100 feet long. The next day water conditions change and the structures are lost to the murkiness and silt of the lake.


Lake Mills then becomes a center of statewide attention as newspapers run articles.


Famous Diver Max Nohl, the true inventor of the ‘SCUBA’ tests his equipment in Rock Lake. He comes upon a tall cone shaped pyramid in the south end of the lake. The structure made of small stones looked like an upside down ice cream cone that was definitely manmade according to Nohl. Nohl plans to come back to further explore the pyramid legends of Rock Lake. Nohl dies in car crash with wife several years later before he could return.” 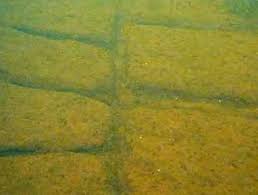 Due to murky water conditions, the structures are rarely visible, even with high tech equipment, but fisherman and divers do catch glimpses of the mysterious structures from time to time and the Rock Lake Research Society has documented their existence using sonar and aerial photography.