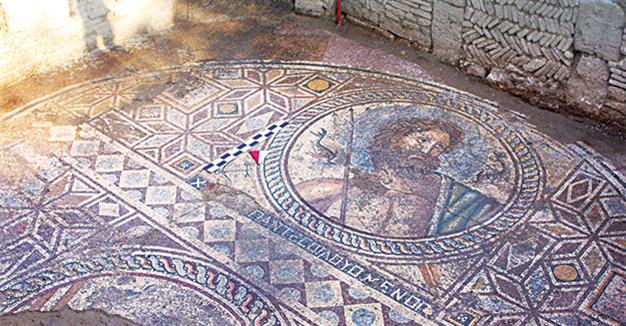 It is believed to date back to the 3rd or 4th century B.C.
The Poseidon mosaic was found in the frigidarium (large cold pool of a Roman bath) part of the ancient bath at the ancient city of Aegae, which is a 1st degree archaeological field. The bottom part of the mosaic contains partly ruined writing in Greek: “Greetings to all of you bathing.” 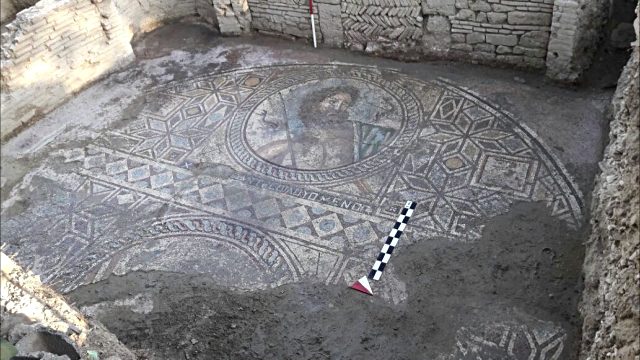 Tari said the city served as a naval base in the era of the Roman Empire and it was also a famous place for Asclepius, the god of medicine in ancient Greek religion and mythology.


“One of three big Asclepius temples of the ancient world is in this city,” he added.


Tari said the region is rich in historical tissue, and they had previously found a mosaic depicting the god of love, Eros.


“We found a new mosaic during recent excavations. The Poseidon mosaic, which is a rare one in terms of its beauty, was unearthed in the grounds of the frigidarium,” he said.

Adana Museum Deputy Director Nedim Dervişoğlu said they continued to place a big importance on excavations in order to further boost the province’s tourism potential, with such works carried out in a number of different parts of the city.


“During excavations, we found a mosaic on a field over a space of 11.39 square meters. It is separated into two main panels. The depiction in the southeastern part of the mosaic has been completely destroyed while the depiction in the north shows Poseidon carrying a trident. There are dolphins in the right and left of Poseidon. When the excavations are completed around the mosaic, the depiction will be meaningful. We believe it dates back to the 3rd or 4th century B.C.,” Dervişoğlu said.
source
Αναρτήθηκε από ΕΛ