When humans leave Earth for good, they’re going to need somewhere to stay. Somewhere spacious, and safe. Portable, but comfy. 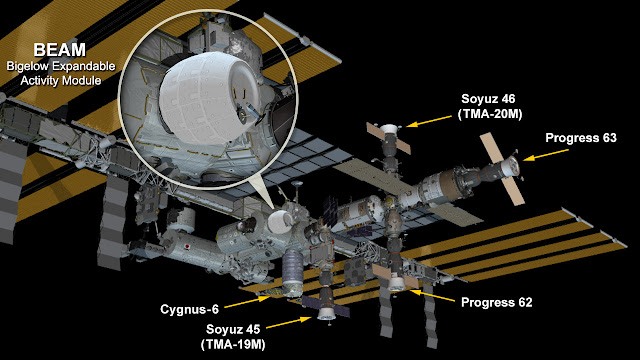 Lightweight, but robust to the dangers of space. Something like a big bouncy castle for kids, but built to house astronauts and solar system colonists and tourists looking for an out-of-this-world vacation.
It sounds like a sci-fi fever dream, but it’s becoming reality. On Friday, SpaceX will launch a so-called “expandable”—a prototype called the Bigelow Expandable Activity Module—to the International Space Station. It will remain there, attached to the Tranquility module, for two years. Bigelow Aerospace hopes its time in orbit will prove the technology worthy of inhabitants.


Robert Bigelow didn’t start his career with visions of astronaut hotels. No, the company’s eponymous founder made his fortune on the hotel chain Budget Suites—extended-stay hotels with a stove in every room. But he soon expanded his worldview. With his money, he founded the National Institute for Discovery Science to research “anomalous phenomena” like UFOs, and donated $3.7 million to the University of Nevada, Las Vegas, to endow a Consciousness Studies chair.
Beyond those fringe interests, though, he wanted to help people stay in space.
So in 1999, he created Bigelow Aerospace to begin work on expandable habitats. He wasn’t the first one to imagine an inflatable outpost in space—just the first who might pull it off. 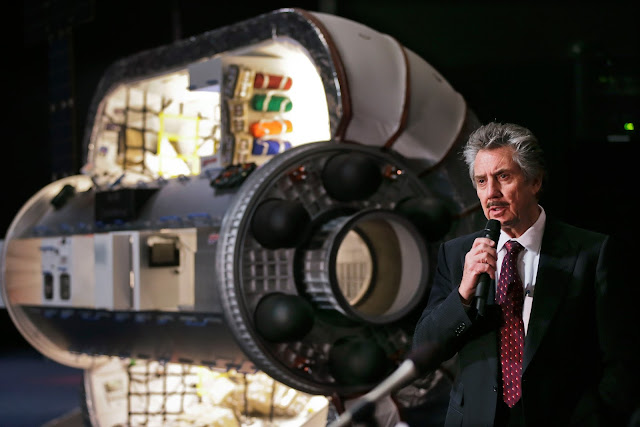 Building these castles in the sky hasn’t been easy. Humans have been working on expandable—and habitable—spaces for nearly 60 years. They started easy, with uninhabitable balloons. NASA engineers developed a mythical substance called Mylar, which they used to construct the Project Echo satellites, launched in 1960 and 1964. These gas-filled spheres were communications devices, covered in metal and looking like building-sized ball bearings. NASA sent signals up to space; the signals bounced off the balloons; the signals returned to a different spot on Earth.
That same decade, Barron Hilton (yes, that Hilton) talked up a lunar hotel, and Goodyear (yes, that Goodyear) mocked up an expandable, doughnut-shaped space station for NASA. But the rubber draft wasn’t safe, and the agency shelved the idea.
The idea of imaginary inflatable settlements returned in the 1990s when, as part of National Security Presidential Directive 6, President George H.W. Bush created the Space Exploration Initiative. Under this act, NASA was to plan a crewed mission to Mars and design a space station to take astronauts there. To save on space and weight—the prime factors limiting trips to space—engineers revived the inflatable habitat scheme. Now, they had even spacier materials, like Kevlar and Nextel. They called their work in progress the “Transit Habitat,” or “TransHab,” because engineers don’t have time to say five syllables (see this webpage last updated in 2003). 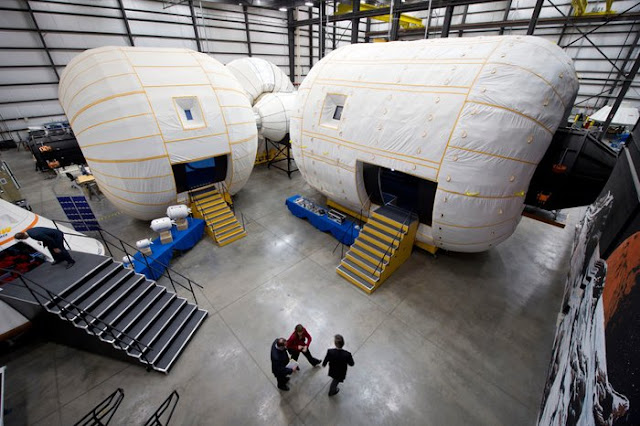 But because the then-under-construction International Space Station was already over-budget and behind schedule, legislator’s feared development of a new, airy space station would just add to the money and timeline problems. So in the 2000 NASA Authorization Act, Congress canceled TransHab. The housing bubble burst.

Bigelow, with his money and his visions of people in space, read about TransHab’s cancellation. This was not a problem for him: This was an opportunity. He contacted NASA and the lead TransHab developer, William Schneider. Soon, Bigelow had licensed the rights to the TransHab designs and convinced Schneider to come on as a consultant.
Just six years later, Bigelow launched an expandable called Genesis I from Orenburg Oblast, Russia. A year later, the company did it again, with the Genesis II. These modules withstood the violent launch conditions and, in space, unfolded and inflated as planned. Their insides held steady with habitable temperatures and pressures, and both are still operational, unpierced, and in orbit. In Genesis II, personal items citizens sent up still float, at a price of $295 per piece.


In 2013, Bigelow leveled up. His company announced that it had signed a $17.8 million contract with NASA to develop and launch the Bigelow Expandable Activity Module. Now, 16 years after the company first took NASA’s designs, and three years after the two organizations began work together, Bigelow is about to say, “Ta-da! We’re doing that thing you tried to do before.” 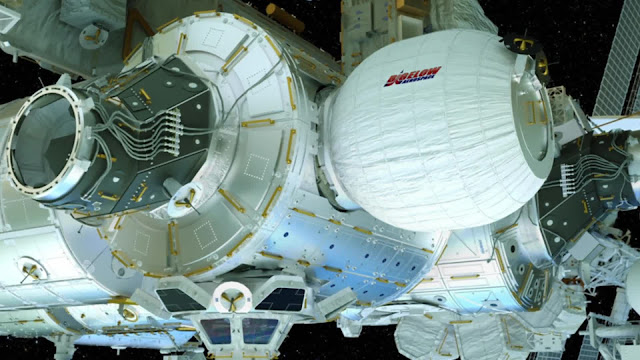 “The interaction and partnership between Bigelow and NASA was both beneficial and challenging,” says Mike Gold, Bigelow’s director of Washington, DC, operations and business growth. Diplomatic. Predictably, the ol’ boy space agency’s plodding pace didn’t perfectly mesh with the go-go-go of new private space ventures. “I think we definitely work on different time frames than NASA does,” says Gold. That they’re launching now—just a few years after the contract began—is a kind of cosmic miracle. “That’s a lightning pace for NASA,” he says.

On Friday, a SpaceX Falcon 9 rocket will carry BEAM to the ISS in the trunk of its Dragon capsule. It will house 3,800 pounds of supplies and experiments, about 3,100 of which are the sucked-down version of the module. While Bigelow reps declined to give details about BEAM’s composition, we know it has a bladder, layers to shield it from tiny space rocks and other debris, and insulation. If anything pierces the module, it should leak, not burst.
After BEAM reaches the station, the robotic Canadarm2 will attach it to Node 3—when it gets around to it, in mid-April (robotic arms have things to do, OK?). At the end of May or beginning of June, astronauts will press a button, and the module will begin its automated inflation, growing from the Space Station’s side like a zit 13 feet long and 10.6 feet across, with a volume of 565 cubic feet. “You can imagine it’s the size of a small bedroom,” NASA’s Rajib Dasgupta, the project and technical integration manager for BEAM, said during a teleconference on March 29. Yes: Imagine it—a small, bounce-house bedroom, in space. 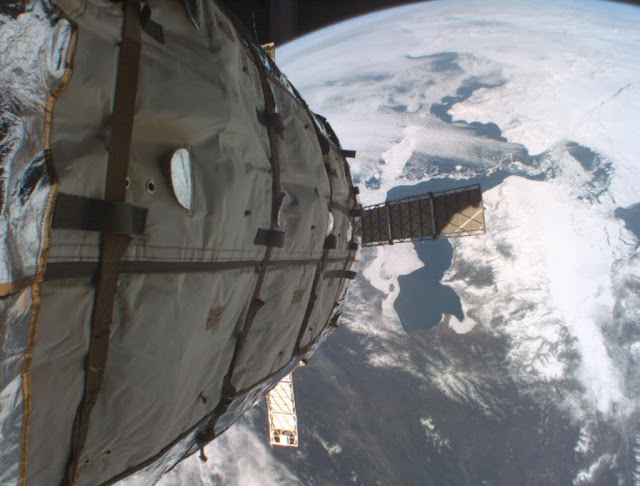 For most of its stay, BEAM will be empty, except for the air it shares with the rest of the ISS. “Currently there is no plan to use the BEAM module as a storage closet,” said Dasgupta. BEAM’s empty space should have basically the same internal environment as the rest of the habitat. “It might be a little cooler,” he said, by which he definitely meant a lot hipper, and also quieter because its walls absorb sound better than the station’s metal.
But four times a year, the station’s astronauts will get to actually, you know, inhabit the place—for three hours at a time. With battery-operated flashlights, they will collect data about the module’s temperature, pressure, general well-being, and radiation, and switch out radiation sensors. They will also swab samples of surfaces to see what weird life might be growing there, before going back to their regularly scheduled program and habitat.
The balloon will protrude from the Space Station’s side for two years. Then, the robotic arm will swing back around and unhook BEAM, its job complete. Cast into its own decaying orbit, the module will spiral back toward Earth, burning up in the atmosphere 290 days after its ejection.
RIP, BEAM. We hardly knew thee.

But scientists should actually know it well enough by then. A network of quantified-self sensors—measuring load, impacts from space debris like micro-meteorites, temperature, and radiation—will have tracked BEAM’s health. If its vitals look good, Bigelow will continue along its current business path, checking goals off its to-do list.
Lisa Kauke, the module’s deputy program manager, is confident that the module won’t crack (metaphorically) under the pressure. “As a company, we’re really comfortable with the technology,” she said, citing the Genesis missions and their thumbs-up performances. 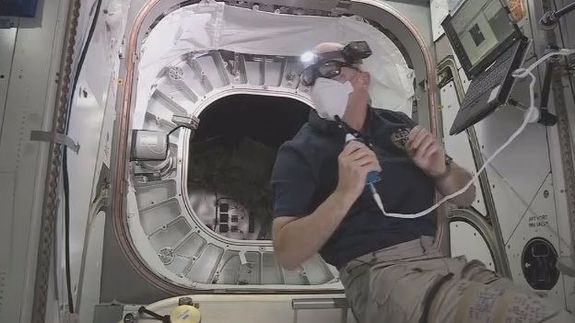 If all goes well, Bigelow plans to install blow-up houses around the solar system, and perhaps beyond. The Moon, says Gold, is the next logical step for agencies public and private. “It’s a target that is realistic and practical given budget realities,” he says, “and a terrific stepping-stone to Mars and other destinations.” They may want to tell NASA about that, as the agency has no plans to set foot or bounce-house on the Moon.


But Bigelow plans to play nice with federal agencies and private companies, in their pursuit of exotic destinations and/or on-orbit hotels. “Rather than attack each other and create an environment of antagonism, it’s important that we work with each other,” says Gold. “The aerospace sector is too small to be divided, and we need to work together. If we do not hang together, we will surely hang separately.”
The company is currently developing another, larger module called the B330, with 12,000 cubic feet of breathing room—about as much as a bungalow. This module is Bigelow’s backbone: B330 is the craft it can use for science, industry, tourism, and trips to other orbs. But best of all, the module—rated for six occupants—isn’t meant to float alone in space. It will link up with other B330s, forming the bulges and kinks that are the first step in any great balloon art project.
“This is one small step for Bigelow Aerospace, one giant leap for expandable habitable technology,” quips Gold. This sounds like a sentence they repeat around the office, perhaps getting tongue-tied as they assert their—and expendable’s’—place in space history.