This is the world famous Kailasa temple at Ellora and let's look objectively into who could have built this amazing structure. 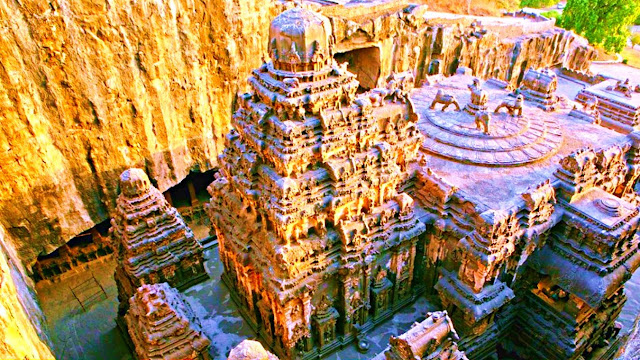 By the end of this video, I hope you will agree with me that our history is completely wrong, and that this temple was built by a very advanced civilization.
What is so special about this temple? This temple was not constructed by adding stone blocks, but an entire mountain was carved to create this temple. This is the only example in the whole world where a mountain was cut out from the top, to create a structure. In all the other temples and caves, even in Ellora and the rest of the world, the rock was cut from the front and carved as they went along. The whole world has followed a rock cutting technique called "cut-in monolith" while Kailasa temple is the only one that has used the exact opposite technique called "cut-out monolith". 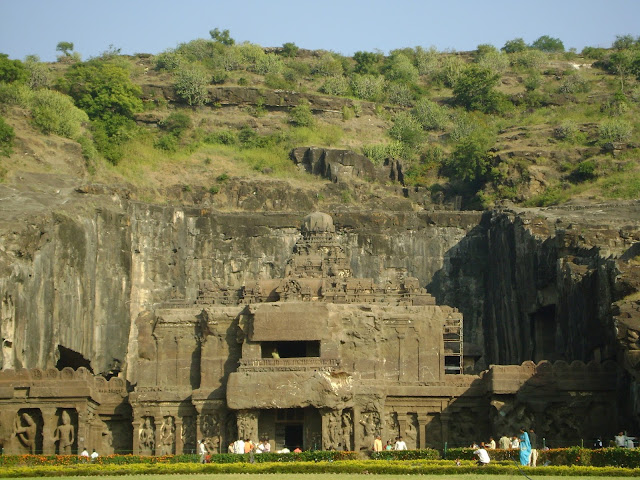 To see why this rock cutting technique is so different, let's take a look at this pillar that is over 100 feet tall. See how small human beings look when compared to this pillar. Normally, to create such a huge pillar, it would take years of work, carving accurately on the huge rock. But this pillar was carved by scooping out all the pieces of mountain around it. You can imagine the amount of rock, which has been removed to create this pillar.


Historians and archaeologists are confused because of the sheer amount of rock that was removed in this temple. Archaeologists confirm that over 400,000 tons of rock had to be scooped out, which would have taken not years, but centuries of human labor. Historians have no record of such a monstrous task and they think that it was built in less than 18 years.


Let us do a simple math and see if historians could be right. I am going to assume that people worked every day for 18 years and for 12 hours straight with no breaks at all. I am going to ignore rainy days, festivals, war time and assume that people worked like robots ceaselessly. I am also going to ignore the time taken to create intricate carvings and complex engineering design and planning and just focus on the removal of rock. 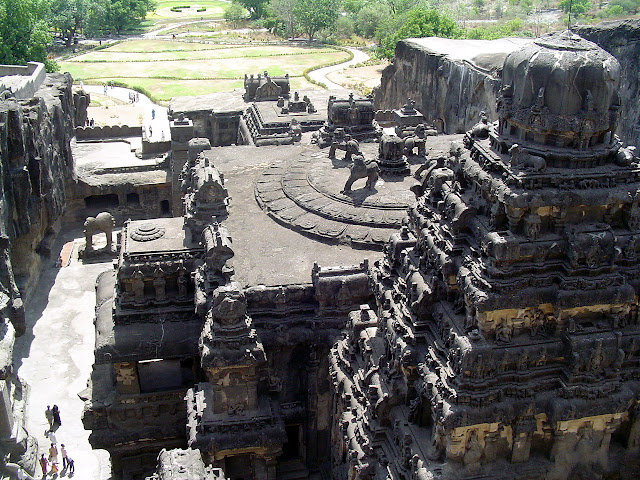 
Now, forget about creating such an extraordinary structure. Can human beings at least destroy this temple? In fact, Aurangzeb a Muslim king employed a thousand workers to completely demolish this temple. In 1682, he ordered that that the temple be destroyed, so that there would be no trace of it. Records show that a 1000 people worked for 3 years, and they could only do a very minimal damage. They could break and disfigure a few statues here and there, but they realized it is just not possible to completely destroy this temple. Aurangzeb finally gave up on this impossible task.

Note that this attempted destruction is very similar to another mysterious structure called The Menkaure's pyramid in Egypt. Another Muslim ruler wanted all the pyramids to be destroyed, and started his work from the Menkaure's pyramid. After years of trying, he was only able to make a small dent on the pyramid. He gave up too. Were all these indestructible structures around the world created by extraterrestrials? Is that why human beings are not even able to destroy them? In fact, archaeologists agree that Kailasa temple was created before any other temple in the Ellora cave complex. Could this have been built centuries before human beings started carving other temples nearby? Is this why the architecture, the design, and the size is so much better and bigger than other temples? If it was built by humans, it is logical to expect that the rock cutting techniques and design would become better over time. People would gain more experience and knowledge and make better structures in the future. However, the Kailasa temple is the oldest and the biggest temple carved with engineering perfection.

Unlike other temples, the Kailasa is the only temple that is visible from the air. Out of 34 temples, all carved side by side, Kailasa stands out and you can see it while flying over it. Is this just a coincidence? Or was it designed for people to see it from the air, like Nazca lines of Peru? Even on Google earth, the aerial view of Kailasa temple clearly shows an X mark. This is how it looks from the top; you can see a circular design that is studded with 4 lions that create this huge X mark. Was this created as a signal for extraterrestrials, who can spot the location while flying?