The "Eye of the Sahara" (video)

For millennia, the Eye of the Sahara was hiding in plain sight. That's because this huge and mysterious geologic formation is hard to spot from ground level, walking around on Earth. 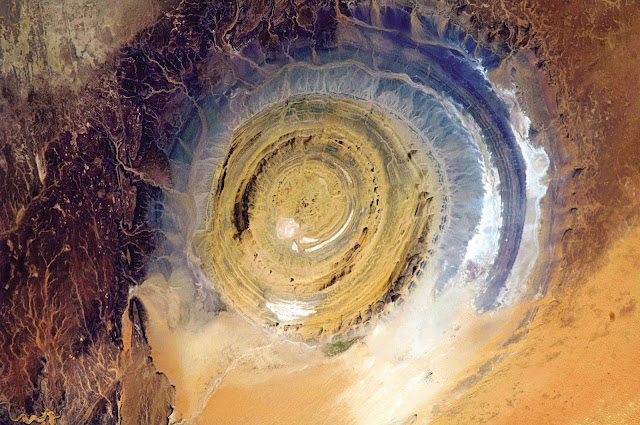 It turns out we only really discovered this incredible bullseye in the sand when we began sending humans into space, but even now we've found it, scientists still don't fully understand it.
The Eye of the Sahara, which is more formally known as the Richat structure, is located in the Western Sahara Desert in Mauritania. On the ground, it's about 25 miles (40 km) across.

When the Gemini IV mission, a four-day orbit around Earth, was being prepared in 1965, the astronauts were asked to take photos of Earth's terrain.


They were particularly asked to look out for "any large circular features which might be the roots of impact structures", according to the text accompanying a set of photographs published from the mission.


Impact craters are geologically important because they tell us about the history of the Earth. Also, knowing how many times space rocks have crashed into our planet can help scientists make predictions about the future.


And for a while, scientists did think that the Eye of the Sahara was an impact crater. But they didn't find enough melted rock to make that guess hold water. Current theories suggest a much more complicated story behind this incredible natural formation. 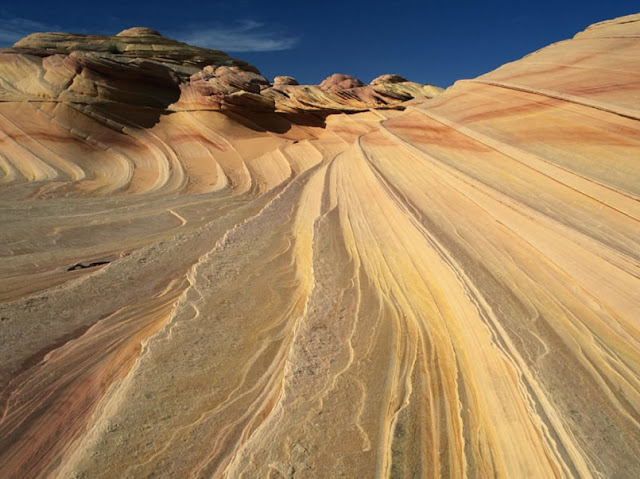 The main ring structure of the Eye is the eroded remains of what was once a dome of layers of the Earth's crust.

The current theory on how it formed

Scientists still have questions about the Eye of the Sahara. But two Canadian geologists have a working theory about its origins.


They think the Eye's formation began more than 100 million years ago, as the supercontinent Pangaea was ripped apart by plate tectonics and what are now Africa and South America were being torn away from each other.


Molten rock pushed up towards the surface but didn't make it all the way, creating a dome of rock layers, like a very large pimple. This also created fault lines circling the Eye and crossing it. The molten rock also dissolved limestone near the center of the eye, which collapsed to form a special type of rock called breccia. 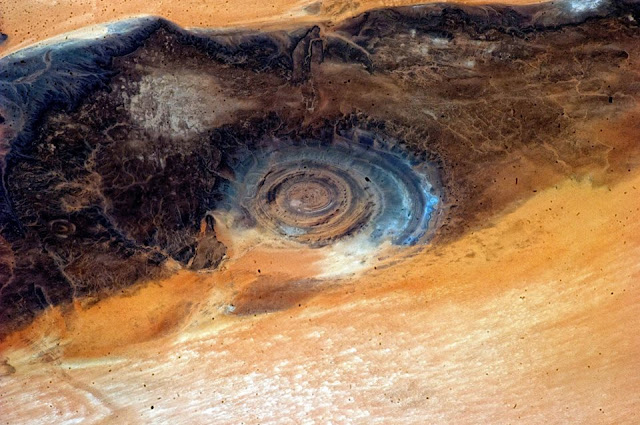 A little after 100 million years ago, the Eye erupted violently. That collapsed the bubble partway, and erosion did the rest of the work to create the Eye we know today. The rings are made of different types of rock that erode at different speeds. The paler circle near the center of the Eye is volcanic rock created during that explosion.


Modern astronauts are fond of the Eye because so much of the Sahara Desert is an unbroken sea of sand. The Eye is one of the few breaks in the monotony, and now it's become a key landmark for them.


Some people believe the Eye of the Sahara is actually the remains of the city of Atlantis, which Plato described as concentric rings of water and land. But if you ask us, the geological history this formation reveals is way more interesting.