A “ghost” galaxy almost completely made of dark matter – the mysterious unseen material that accounts for 27% of the universe – has been discovered by astronomers. 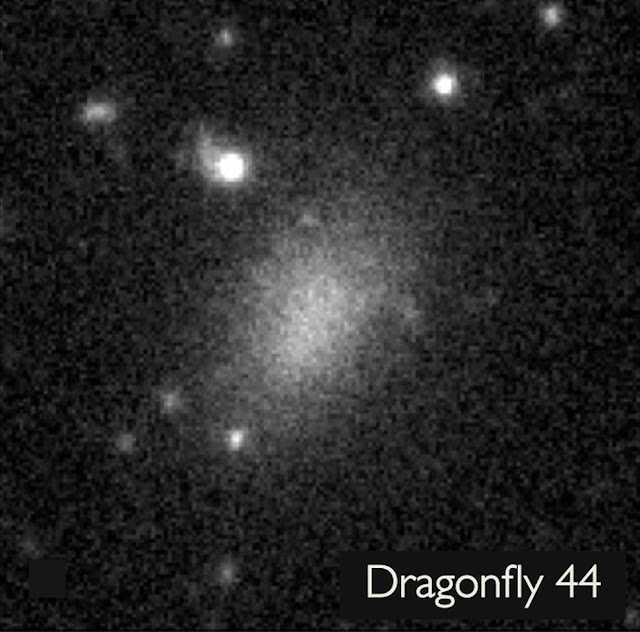 Even though the massive galaxy, named Dragonfly 44, is relatively nearby in cosmological terms it is so faint that scientists missed it for decades.
It was eventually identified last year in the Coma galaxy cluster, about 330 million light years away.


Further study revealed that it was no ordinary collection of stars.     Although Dragonfly 44 contains roughly same amount of mass as our own galaxy, the Milky Way – equivalent to a trillion suns – only one hundredth of one per cent of it is in the form of stars, dust, gas and other examples of “normal” matter.


The remaining 99.99% consists of dark matter, the nature of which is unknown. While it contains some “normal” stars, there are not many.     The Milky Way has more than a hundred times more stars than Dragonfly 44. 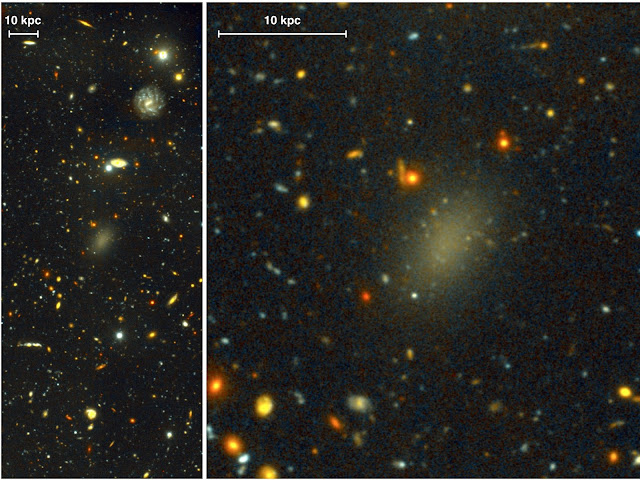 Astronomers at the Keck observatory in Hawaii made the discovery after studying the movement of the galaxy’s stars.
Professor Pieter van Dokkum, a member of the team from Yale University in the US, said: “Motions of the stars tell you how much matter there is. They don’t care what form the matter is, they just tell you that it’s there.


“In the Dragonfly galaxy, stars move very fast. So there was a huge discrepancy …


“We found many times more mass indicated by the motions of the stars than there is mass in the stars themselves.”


Without the extra gravity of dark matter binding it together, Dragonfly 44 would quickly fall apart. The scientists suspect there could be other dark matter galaxies waiting to be discovered.


Scientists now know that only 5% of the interchangeable mass-energy in the universe is made up of “normal” matter that we can see and touch.


Dark matter, which exerts a gravitational pull, makes up 27%. It does not reflect light and cannot be detected directly by any means known to science. Despite a number of theories, the true nature of dark matter remains unknown.


The remaining 68% of the universe is made from something even more baffling, dark energy – a kind of anti-gravity force that appears to be repelling galaxies away from each other at an accelerating rate.


Dr Van Dokkum added: “This has big implications for the study of dark matter …


“Ultimately what we really want to learn is what dark matter is.


“The race is on to find massive dark galaxies that are even closer to us than Dragonfly 44, so we can look for feeble signals that may reveal a dark matter particle.”