Excavations on Mount Lykaion, known as the birthplace of the god Zeus, uncovered a teenager’s skeleton. According to ancient legend, a boy was sacrificed with the animals on the mountaintop. 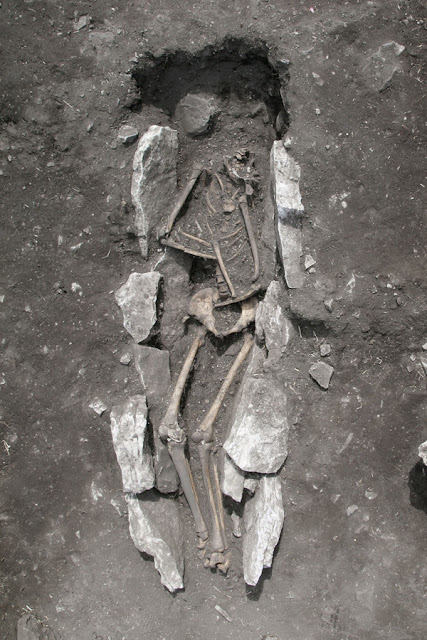 ATHENS, GREECE—Archeologists have made a sinister discovery at the top of a Greek mountain which might corroborate one of the darkest legends of antiquity.
Excavations this summer 2016 on Mount Lykaion, once worshiped as the birthplace of the god Zeus, uncovered the 3,000-year-old skeleton of a teenager amid a mound of ashes built up over a millennium from sacrificed animals. 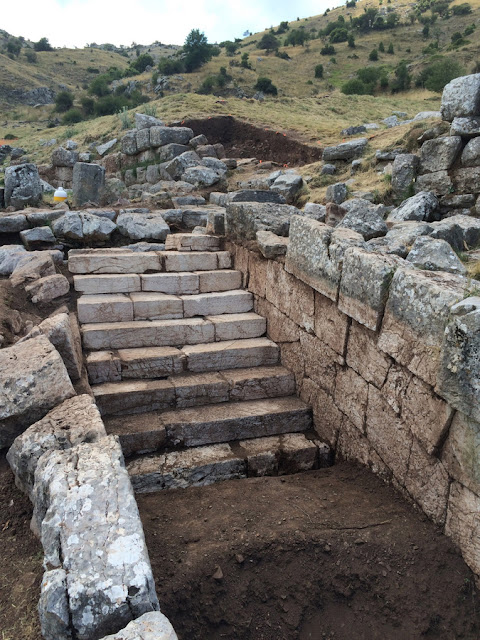 Greece’s Culture Ministry said on Wednesday that the skeleton, probably of an adolescent boy, was found in the heart of the 30-meter (100-foot) broad ash altar, next to a man-made stone platform.


Excavators say it’s too early to speculate on the nature of the teenager’s death but the discovery is remarkable because the remote Mount Lykaion was for centuries associated with the most nefarious of Greek cults: Ancient writers — including Plato — linked it with human sacrifice to Zeus, a practice which has very rarely been confirmed by archaeologists anywhere in the Greek world and never on mainland Greece.


According to legend, a boy was sacrificed with the animals and all the meat was cooked and eaten together. Whoever ate the human part would become a wolf for nine years.


“Several ancient literary sources mention rumors that human sacrifice took place at the altar, but up until a few weeks ago there has been no trace whatsoever of human bones discovered at the site,” said excavator David Gilman Romano, professor of Greek archaeology at the University of Arizona.

“Whether it’s a sacrifice or not, this is a sacrificial altar ... so it’s not a place where you would bury an individual. It’s not a cemetery”, Romano told The Associated Press. A very unusual detail, he said, was that the upper part of the skull was missing, while the body was laid among two lines of stones on an east-west axis, with stone slabs covering the pelvis.


The mountaintop in the Peloponnese region is the earliest known site where Zeus was worshiped, and even without the possible human sacrifice element it was a place of massive slaughter. From at least the 16th century B.C. until just after the time of Alexander the Great, tens of thousands of animals were killed there in the god’s honor.


Human presence at the site goes back more than 5,000 years. There’s no sign yet that the cult is as old as that, but it’s unclear why people should otherwise choose to settle on the barren, exposed summit. 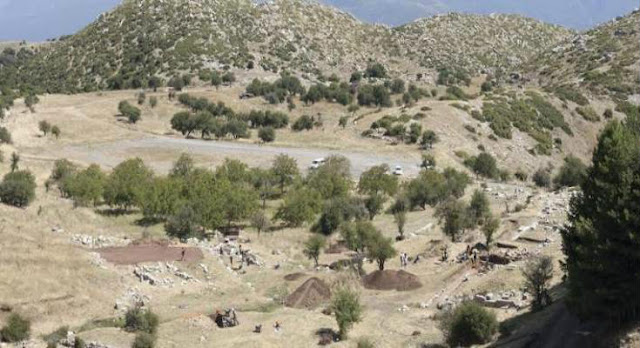 Pottery found with the human remains dates them to the 11th century B.C., right at the end of the Mycenaean era, whose heroes were immortalized in Greek myth and Homer’s epics, and several of whose palaces have been excavated.

In Greek mythology, Lycaon (Greek: Λυκάων) was a king of Arcadia, son of Pelasgus and Meliboea, who, in the most popular version of the myth, tested Zeus by serving him the roasted flesh of his son Nyctimus, in order to see whether Zeus was truly omniscient. In return for these gruesome deeds, Zeus transformed Lycaon and his offspring into the forms of a wolf; Nyctimus was restored to life.
Despite being notorious for his horrific deeds, Lycaon was also remembered as a culture hero: he was believed to have founded the city Lycosura, to have established a cult of Zeus Lycaeus and to have started the tradition of the Lycaean Games, which Pausanias thinks were older than the Panathenaic Games. According to Hyginus, Lycaon dedicated the first temple to Hermes of Cyllene. The Arcadian town Nonakris was thought to have been named after the wife of Lycaon. 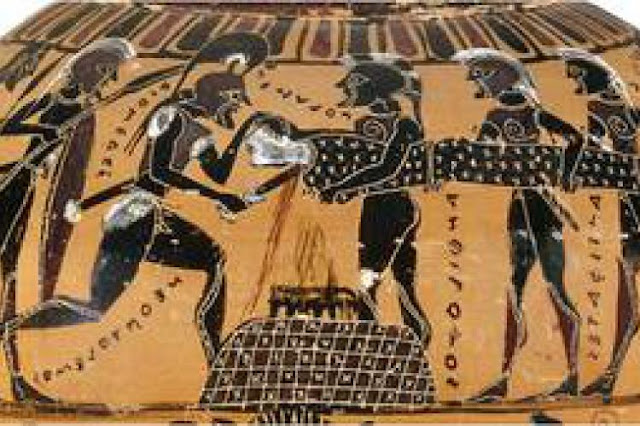 Versions of the main myth

There are several version of the Lycaon myth already reported by Hesiod (Fragmenta astronomica, by Eratosthenes, Catasterismi), told by several authors. The most popular version is the one reported by Ovid in the first book of his Metamorphoses.
The different versions of the myth are as follows:

According to the Bibliotheca, Lycaon had sired 50 sons with many wives. These sons were the most nefarious and carefree of all people. To test them Zeus visited them in the form of a peasant. They mixed the entrails of a child into the god's meal, whereupon the enraged Zeus threw over the table with the meal, which explains the name of the city Trapezus (from the word ‘τράπεζα’="table"), and killed Lycaon and his sons with lightning. Only the youngest son, Nyctimus, was saved due to the intervention of Gaia.

John Tzetzes records two similar versions which agree with Apollodorus' account; one mentions that the idea to serve Zeus a slaughtered child belonged to Maenalus, one of Lycaon's sons, while the other makes Nyctimus the victim.

According to Pausanias, Lycaon was instantly transformed into a wolf after sacrificing a child on the altar of Zeus and sprinkling the blood on the altar.

According to Lycophron, all were transformed into wolves for having devoured Nyctimus. Lycophron extends the characteristics of Lycaon and his sons onto all the Arcadians. 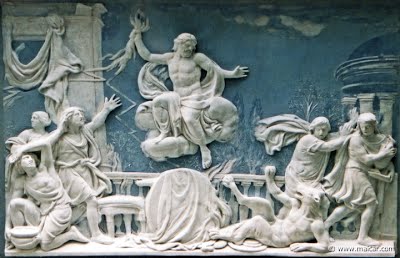 The version recounted by Hyginus in his Fabulae is basically the same as that of Pseudo-Apollodorus. In Astronomica, Hyginus describes the victim of Lycaon as being Arcas, son of Jupiter (Zeus) and Callisto, the daughter of Lycaon. When saved and restored to life, Arcas was brought up to be a hunter. By mistake, he hunted himself and his mother (for the moment transformed into a bear) into a temple where entrance was punished by death. Both were saved by Zeus to constitute the constellations Arctophylax and the Great Bear.

Nicolaus Damascenus tells that Lycaon's sons were nefarious. To test Zeus they mixed the flesh of a boy into the sacrifices, whereupon all who were present during the murder of the child were killed by lightning.

According to Ovid, Lycaon mistrusted and derided the signs of Zeus' divine nature which the god openly demonstrated upon arrival to Arcadia. Determined to find out whether the guest was truly a god or a mortal, Lycaon served Zeus the flesh of a prisoner, partly cooked and partly roasted. Moreover, in his quest to test Zeus' immortality Lycaon attempted to murder the god while he slept. Thereupon Zeus brought the roof down and transformed the fleeing Lycaon into a wolf.

According to the dictionary Suda, Lycaon had diligently been guarding the laws established by his father for the Arcadian people. In order to keep his subjects from injustice, he would tell them that Zeus frequented his home in the guise of a mortal man so as to keep watch over how lawful the humans were. One day when he was about to perform a sacrifice, the people were eager to know if the god was present; to find out if Lycaon told them the truth about Zeus' visits, they killed one of the king's fifty sons and mixed him in with the sacrificial meat, whereupon all of them were killed by lightning.

According to Eratosthenes, Lycaon butchered his grandson (that is, Arcas), who was put together again by Zeus and placed upon the constellations, whereas Lycaon's house was struck by a thunderbolt.
source