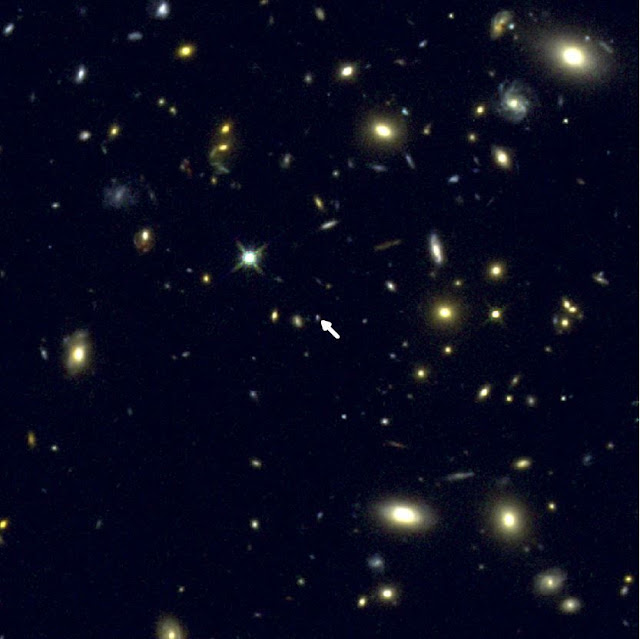 Galaxy COSMOS-1908 is in the center of this Hubble Space Telescope image, indicated by the arrow.
Nearly everything in the image is a galaxy; many of these galaxies are much closer to the Earth than COSMOS-1908. Credit: Ryan Sanders and the CANDELS team.


UCLA astronomers have made the first accurate measurement of the abundance of oxygen in a distant galaxy. Oxygen, the third-most abundant chemical element in the universe, is created inside stars and released into interstellar gas when stars die. Quantifying the amount of oxygen is key to understanding how matter cycles in and out of galaxies.


This research is published online in the Astrophysical Journal Letters, and is based on data collected at the W. M. Keck Observatory on Mauna Kea, in Hawaii.


"This is by far the most distant galaxy for which the oxygen abundance has actually been measured," said Alice Shapley, a UCLA professor of astronomy, and co-author of the study. "We're looking back in time at this galaxy as it appeared 12 billion years ago."


Knowing the abundance of oxygen in the galaxy called COSMOS-1908 is an important stepping stone toward allowing astronomers to better understand the population of faint, distant galaxies observed when the universe was only a few billion years old and galaxy evolution, Shapley said.


"Close galaxies are much brighter, and we have a very good method of determining the amount of oxygen in nearby galaxies," Sanders said. In faint, distant galaxies, the task is dramatically more difficult, but COSMOS-1908 was one case for which Sanders was able to apply the "robust" method commonly applied to nearby galaxies. "We hope this will be the first of many", he said.


Shapley said that prior to Sanders' discovery researchers didn't know if they could measure how much oxygen there was in these distant galaxies.


"Ryan's discovery shows we can measure the oxygen and compare these observations with models of how galaxies form and what their history of star formation is", Shapley said.


The amount of oxygen in a galaxy is determined primarily by three factors: how much oxygen comes from large stars that end their lives violently in supernova explosions—a ubiquitous phenomenon in the early universe, when the rate of stellar births was dramatically higher than the rate in the universe today; how much of that oxygen gets ejected from the galaxy by so-called "super winds," which propel oxygen and other interstellar gases out of galaxies at hundreds of thousands of miles per hour; and how much pristine gas enters the galaxy from the intergalactic medium, which doesn't contain much oxygen.


"If we can measure how much oxygen is in a galaxy, it will tell us about all these processes," said Shapley, who, along with Sanders, is interested in learning how galaxies form and evolve, why galaxies have different structures, and how galaxies exchange material with their intergalactic environments. 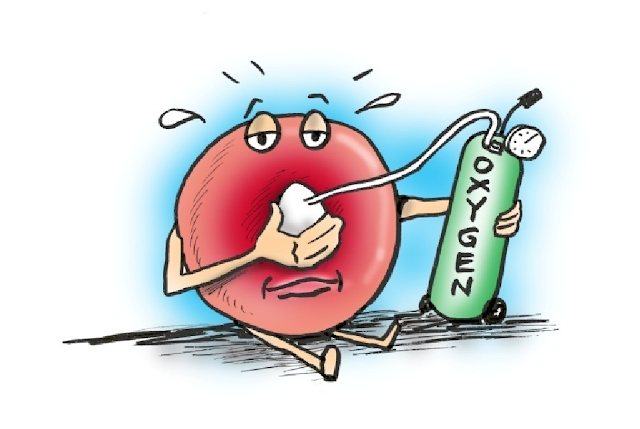 Shapley expects the measurements of oxygen will reveal that super winds are very important in how galaxies evolved. "Measuring the oxygen content of galaxies over cosmic time is one of the key methods we have for understanding how galaxies grow, as well as how they spew out gas into the intergalactic medium", she said.


The researchers used an extremely advanced and sophisticated instrument called MOSFIRE (Multi-Object Spectrometer for Infra-Red Exploration) installed on the Keck I telescope at the Keck Observatory. This five-ton instrument was designed to study the most distant, faintest galaxies, said UCLA physics and astronomy professor Ian McLean, project leader on MOSFIRE and director of UCLA's Infrared Laboratory for Astrophysics. McLean built the instrument with colleagues from UCLA, the California Institute of Technology and UC Santa Cruz and industrial sub-contractors.


MOSFIRE collects visible-light photons from objects billions of light years away whose wavelengths have been stretched or "redshifted" to the infrared by the expansion of the universe. Due to the finite speed of light, MOSFIRE is providing a view of these galaxies as they existed billions of years ago, when the light first started traveling to Earth.


MOSFIRE is a type of instrument known as a "spectrograph", which spreads the light from astronomical objects out into a spectrum of separate wavelengths (colors), indicating the specific amount of energy emitted at each wavelength. Spectrographs enable astronomers to determine the chemical contents of galaxies, because different chemical elements—such as oxygen, carbon, iron or hydrogen—each provide a unique spectral fingerprint, emitting light at specific wavelengths.


To characterize the chemical contents of COSMOS-1908, Sanders analyzed a particular wavelength in the MOSFIRE spectrum of this galaxy that is sensitive to the amount of oxygen. "MOSFIRE made Ryan's measurement possible", said Shapley, who described it as an "amazing instrument".