A colossal whirlpool the size of a state appeared near the coast of South Africa, leaving scientists scratching their heads because they couldn’t find any explanation regarding its unfamiliar features. 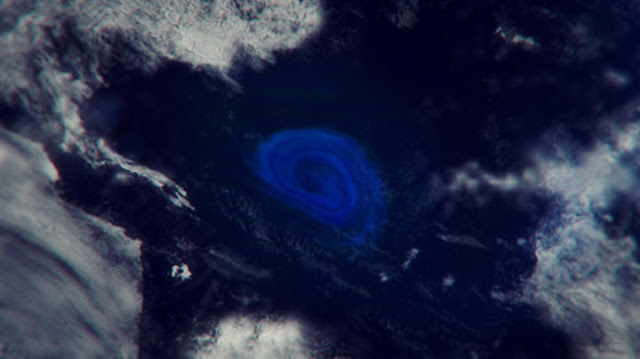 
The surface of our planet is mostly covered with water, about 71 percent to be more precise. This abundance of aquatic mass remains mostly unexplored, leaving plenty of room to speculate what could reside on the depths of this world’s oceans.
To visualize the tremendous watery proportions held by this planet, we must first think of the oceans which hold about 96.5 percent of all Earth’s water. That sounds really vast, doesn’t it? But besides this staggering chunk of water, there is still 3.5 percent that can be found in the air as water vapors, in lakes and rivers, icecaps and glaciers, underground as soil moisture or rapid streams, and last but not least, inside of every living creature.


Fascinating Glowing Firefly squids of Toyama Bay light up the shores in electric blue. Scientists stunned by mysterious glowing blue star. With these numbers at hand, it’s easy to understand that the perfect hiding spot for anyone or anything that doesn’t want to be discovered is underwater.
Since the Cold War, considerable portions below the oceans were studded with hydrophones by both the U.S. and Russia, and there’s a certain rumor speaking of fiber optics cables spread across the ocean floor before they were even put in place for public use.


Knowing this you might think that there’s no secrecy left down there, but the tremendous amount of water speaks in favor of dominant seclusion. Well, at least for those of us who are not involved with the military or other secret governmental facilities. Overall, recent years have shown that ocean mysteries are found in abundance. From the underwater anomalies discovered while studying sonar images of the ocean floor, to bizarre events depicted by airplane pilots, there is no doubt left regarding the unusual activity that’s happening below the oceans. 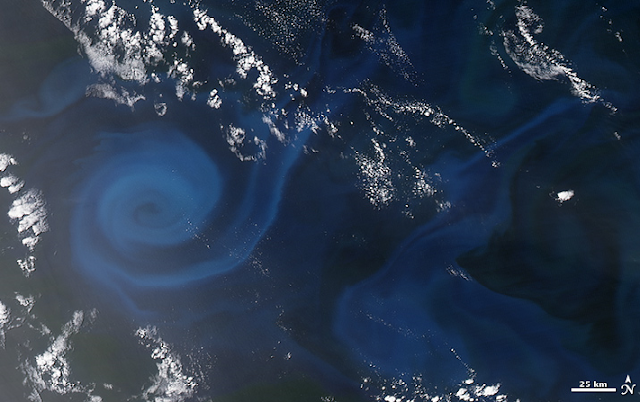 What’s causing all this remains to be discovered, and there’s a chance that not only natural phenomenon are found at the bottom of this, but also the military, or even extraterrestrials. To prove these claims, I’ll highlight an intriguing event that has captivated the curiosity of scientists and amateur explorers alike. It remains unexplained as of now, since no conclusive explanation has been presented, nor any photographic or video evidence except the images received via satellite. On December 26, 2011, NASA’s Terra satellite was passing over the South Atlantic Ocean when it beamed back to Earth images of a mesmerizing event that was just taking place. At first glance, the peculiar accumulation of water appears to be a giant whirlpool that’s vividly glowing blue, but because of the unusual proportions, the team of scientists investigating this sight were perplexed.

The colossal vortex was spotted about 500 miles off the Coast of South Africa and its enormous diameter stretched over a portion of 100 miles of the Atlantic Ocean. According to analysts, such a massive sighting the size of an entire state has never been recorded until then. Furthermore, the glowing blue light was another puzzling factor in determining its exact cause and origins.


One possible explanation concerning its vivid blue color proposed by the analysts is phytoplankton – a considerable gathering of microorganisms that emit a glowing blue light. Because of the overwhelming sucking force of the vortex, phytoplankton together with debris that got in the way were trapped inside and carried across the surface of the ocean.


This sounds reasonable enough to explain the color, but what about the massive proportions of the whirlpool? This is where the interesting part takes place. Scientists have suggested that such a phenomenon can only be caused by underwater earthquake, at least from a scientific point of view. Analysts further compared this ocean anomaly to another giant vortex that has devastated Japan’s shoreline back in 2011.


This whirlpool was the result of a magnitude-9 earthquake that has ravaged the Japanese coastline by causing one of the most devastating tsunamis recorded to have hit Japan, and the 4th most powerful in the world since modern day recording began in 1900. However, the size of the whirlpools generated by this earthquake pales in comparison to the one discovered by NASA’s satellite.


So who or what could have caused this 100 miles blue vortex?


Exploring the scientific possibilities, analysts have proposed an extreme weather scenario, or a powerful earthquake that could have occurred on the ocean floor. However, no such reports were recorded in that particular area of the Atlantic, and there were no fishing boats speaking of any unusual atmospheric conditions, leaving scientists baffled because of the mysterious conditions in which this unusual sighting had occurred.


The giant blue vortex was only visible for a limited amount of time, and it remains unknown if any authorities managed to reach it in time to document its monstrous presence. It reminds us of the unusual red glowing dots witnessed by two pilots during a commercial flight over the Pacific, an event that also rests without a viable explanation.


Besides the scientific explanation, the UFO community has proposed several other possibilities for the colossal sighting. One theory speaks of a submerged alien base that has caused the blue vortex the moment it sank beneath the Atlantic, while another hints towards secret military activity under the ocean’s surface. With no earthquake to cause such a devastating spinning force, it remains plausible that some kind of otherworldly device or an experimental machine used by either the navy or military is responsible for this.