Surviving in the jungle with Vietnamese Tarzan (videos)

Vietnam jungle men: Incredible story of Ho Van Lang, the boy who lived in the wild for 41 years.

Ho Van Lang knew nothing of the modern world but lived happily and healthily in the Vietnamese jungle for 41 years. 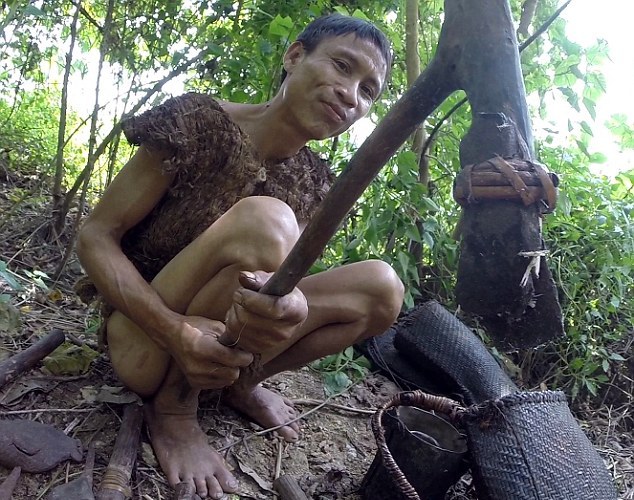 Three years ago, a man was 'rescued' from the Vietnamese jungle, having spent 41 years – almost his entire life – with virtually no contact with other humans. His father, an army veteran, had fled there in 1972 as US troops bombed their village, killing the rest of the family.
Over the next four decades, Ho Van Lang was raised completely cut off from civilization. He and his father, Ho Van Thanh, survived by hunting, foraging and living in tree houses, moving further into the jungle every time nearby villages expanded. Thanh believed the Vietnam War was still going on, so was wary of people and would flee every time he encountered others. 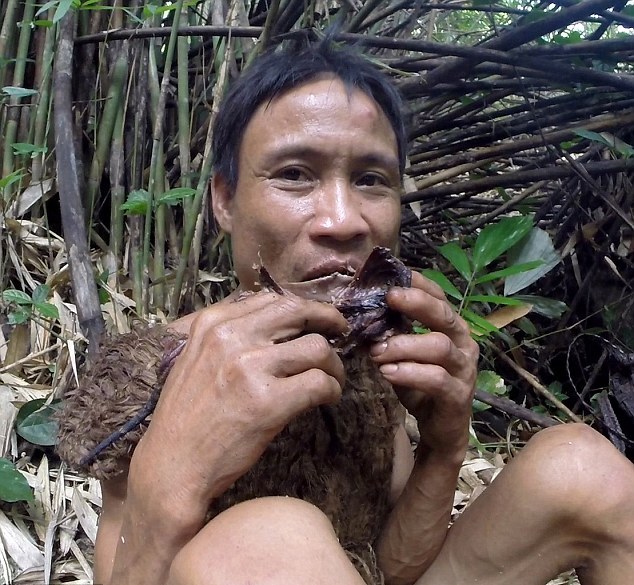 Stories of the pair began to spread among villages and, around a decade ago, one man, Ho Van Tri, took a particular interest. It emerged that during the bombings, one of Thanh's other sons had survived.
Tri spent years going into the jungle looking for his father and brother. Eventually, he made contact and began to forge a relationship with Lang, visiting him regularly trying to convince him and his father to return home.

Eventually, with Thanh's mental and physical health deteriorating (and encouragement from authorities), Lang and his father were 'rescued' and news of their story spread globally. Three years on, Lang and his father have been living in a house in a village, slowly adapting to civilisation.


Last November, Alvaro Cerezo, managing director of Docastaway – which offers holidays to remote, uninhabited parts of the world – met with Lang. Initially, he had wanted to ask him about survival techniques, but they ended up spending five days together living in the jungle where he had grown up. 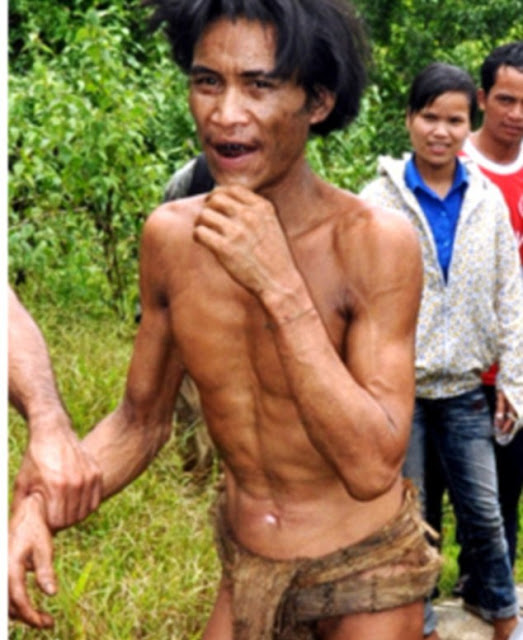 Writing about the experience in a blog post, Cerezo said: "During the first few hours I was with him I could tell that Lang was enthusiastic about the idea of going back, for the first time, to the place in the jungle where he came from. Lang didn't doubt one moment and accepted the invitation and together with his brother and my translator we went to the heart of the jungle.
"At the beginning my intention was to learn new survival techniques from him, but without realizing, I unveiled one of the most endearing people I have ever met. For this and other reasons the 'survival' took a back seat and I decided to relax and enjoy being with him in his environment." 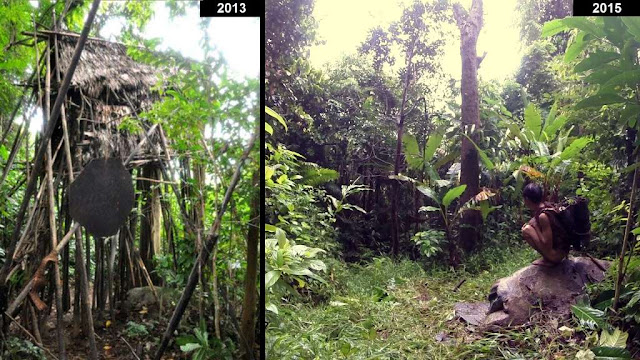 Lang, he said, was very much child-like in his demeanor. He had no concept of time other than day and night, nor sources of energy other than fire and the sun. "Lang, at 41, had never seen artificial lights, not even on the horizon. This 'Mowgli' was completely ignorant of how the outside, civilized world was with the exception of the stories his father told him about the airplanes that crossed the sky."

Thanh limited how much information he gave his son about the outside world. He wanted Lang to fear other people (on account of believing the war was still raging). He did not tell him about females to "dowse his son's instincts". The strategy worked, and he and Yang lived happily together.
Over the 41 years, they lived in five different places on the same mountain range. Their tree houses were built using a thick tree as the "main support". They would build them just a few meters off the ground. Initially, they lived in the lowlands, where it was warmer and there was plenty of water. 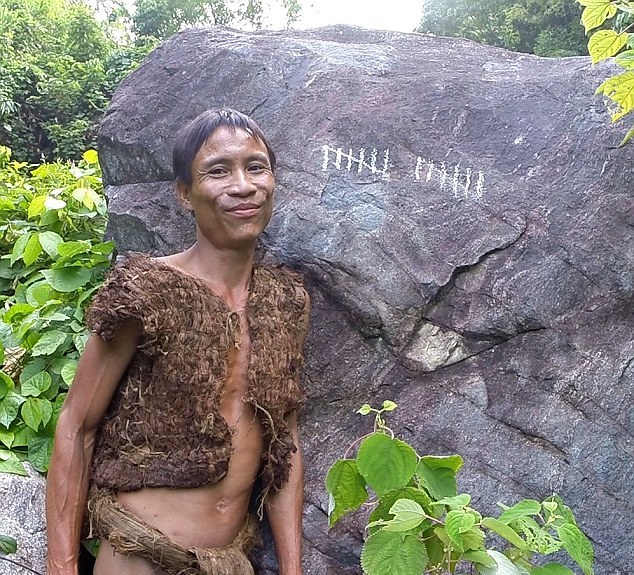 Heavy rainfall meant the river kept flowing year-round and they did not need to boil or filter it. Their diet was highly varied, eating fruit, vegetables, honey and a variety of meats. "One of the things that most surprised me was the ability of Lang in gathering wild food in the jungle. For him, the majority of the jungle plants were edible," Cerezo said. Meat-wise, they ate monkeys, rats, snakes, lizards, frogs, bats, birds and fish – Lang's favorite.
"Because of the advance of 'modern man' they were forced to move to higher levels so the last 20 years they never got to eat more fish. Their method of fishing was to block the course of the river at both extremes with trunks so as to concentrate the fish all in one place. Using stones they managed to daze the fish so they could catch them with their hands. For Lang no part of an animal was to be wasted. While I was with him in the jungle I saw him eat bats as though they were olives. He used the heads and viscera of the rats." While the pair put up defense around their camps, there was little in the jungle that posed any threat to them.

A fire was almost always kept lit and they made a variety of tools, cutlery and cooking utensils from items scattered across the jungle, including the steel from dropped bombs. "Kitchenware, like pans, pots and plates, were made during the first few years from the aluminium they found in a broken-down American helicopter. They never ate with their hands, but had improvised chopsticks made of bamboo. They had about 20 pieces of kitchen ware and today they are still conserved in the village." 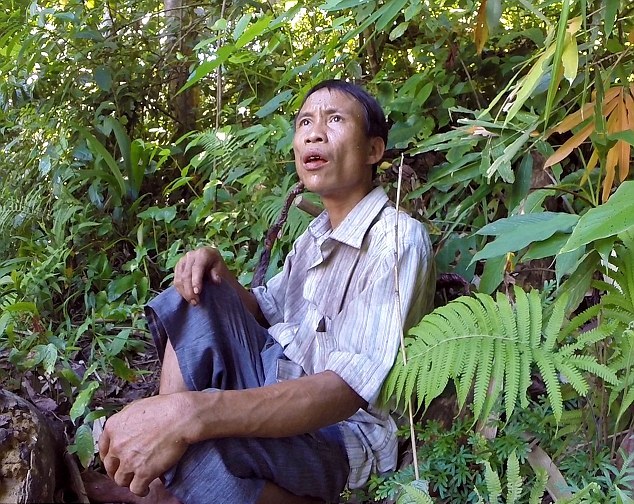 They spoke in a limited dialect belonging to an ethnic minority from the area of Cor. Lang can count to 10, but said there was no reason to go any higher: "I asked him how he explained to his father that he had caught 15 bats and he answered that he said 'a lot' or 'more than 10'. The same applies to writing: Lang didn't know how to represent the numeric symbols. It has to be taken into account that the food and water were never a problem for them so to know the quantity was trivial."
Over the last two decades, intensive deforestation pushed them higher and higher. Eventually, they could go no further – they believed the summit of the mountain was haunted – so became boxed in. Encounters with other people became increasingly inevitable, and it was at this point Lang's brother heard of their existence and began visiting the pair. 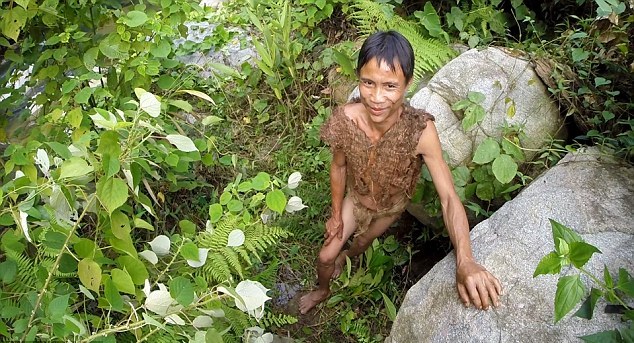 "With age, the father became slower and he began to resign himself into accepting the visits of his presumed son: the father never believed that this warm, loving man was his son, he thought –and still thinks– that all his family died in his home (with the exception of Lang) when the bomb fell on it. Lang, however, was more receptive and he didn't mind when Tri started to visit each year taking salt and spices for them."
Eventually, with Thanh's health getting worse, Lang's life became increasingly difficult. "Due to his father's poor mental state Lang lived the last few years full of stress and anxiety, staying awake all night long in case his father should fall into the nothingness." Because of this, he put up no resistance to returning to the village with his brother.

Lang was taken to the village in a car – something his father had told him about when he was small. He had never experienced "speed" before and spent the whole journey staring out of the window watching the jungle pass quickly. When he got to the village, he was surprised at animals being kept there as "friends".
"Later on, at night, he was completely amazed by the light that came from the light bulbs. Lang told us that being able to enjoy light during the night was something most extraordinary. And just after that he saw a television for the first time ever, something his father had also told him about when young. He knew, therefore, that the people who appeared on it weren't 'inside' the box."
Over their whole time in the jungle, neither he nor his father had suffered serious health problems. Both had a cold about once a year and occasionally they had stomach aches. On returning, they both became sick, having never encountered bacteria and various viruses other people have built up immunity to. 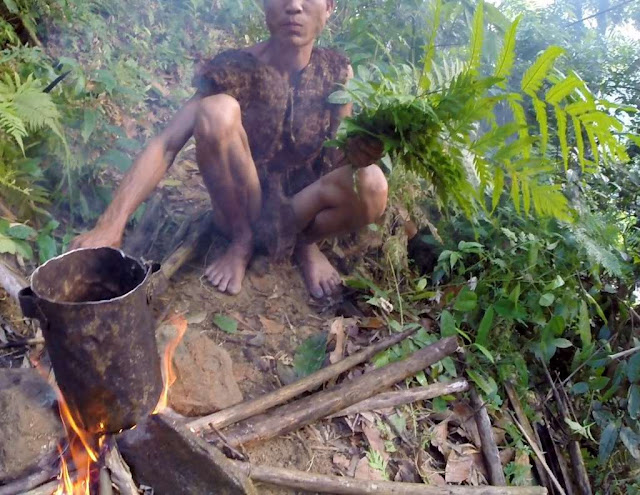 In terms of beliefs, Lang believes in God but thinks the moon was made by man, having been hung in the sky every day with a string. He is aware of his own death, but refuses to speak on the subject. Until they were brought back to civilization, Lang had no idea what he looked like other than what he could see in the reflection of the water.
"Lang's mind is like a one year old child's in many ways, and the hospital physiologists confirmed this," Cerezo said. "As his mind has not been contaminated by any prejudices of any kind, Lang always talks about this kind of subject with no embarrassment whatsoever. And after talking to him for several days I can confirm that Lang has never had the minimum sexual desire and his reproductive instinct has never shown its head in any of its many facets.
"At 42-years-old Lang never knew the existence of the female sex as his father never told him. More surprising still is that today, now being able to distinguish between men and women, he still doesn't know the essential difference between them.
"Regarding gastronomy, his great discovery has been fish from the ocean which he says is his favorite food. Lang hasn't seen the sea yet, nor is he curious to see it. He doesn't even understand the concept of a nation, nor is he conscious that the earth is round."
Now Lang spends his time in the village. He is still very much ignorant of social rules, is extremely trusting and obedient and finds it difficult to distinguish between good and bad. "His sense of humor is like that of a baby, copying facial gestures or reacting to hide and seek and this contributes to making Lang a very endearing person," he said. 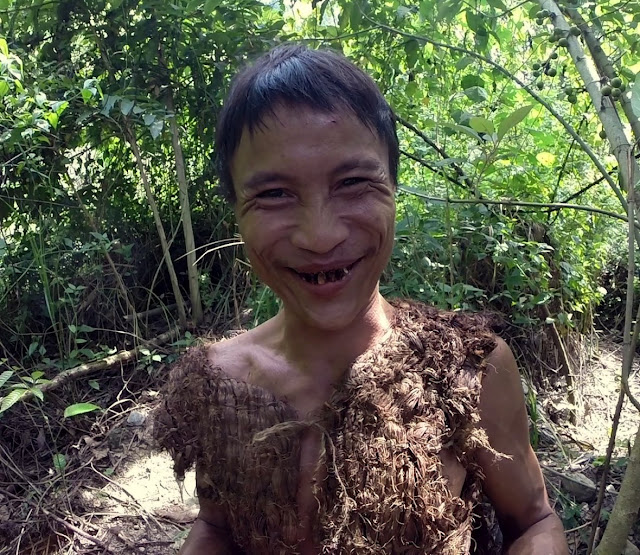 Although Lang's father is not adjusting so well – his main ambition, at 86, is to return to the jungle – Lang has settled in well. He spends most days working on the land with his brother. "It's been three years since Lang arrived in the modern world. The first year was the most difficult for him amongst other reasons, because of health problems from the virus and bacteria new to his system. Nonetheless, we can confirm that Lang is happily adapting to his new life, mainly for the freedom he now enjoys."