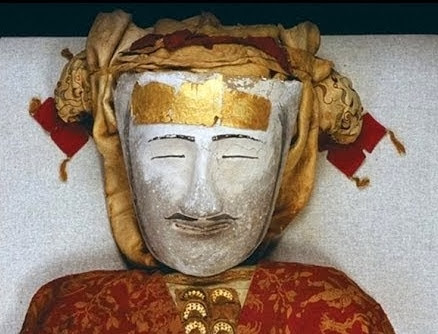 An amazing investigation into the identity of human mummies exhumed from desert sands of China´s Xinjian region. Some are as old as 4000 years, but all Caucasoid.
The Discovery Channel explores the mystery of the ancient mummies of the Xinjang region of China. Learn why these non-Chinese mummies -- some more than 4,000 years old -- are buried in the Chinese Takla Makan Desert and how they were preserved so well.

DNA testing answers some of the mysteries of these blond- and red-haired people, some appearing to be European.
What happened to their society? Witness the examination of remnants of their brittle clothing, including hats that resemble cone-shaped magician hats.
In the late 1980's, perfectly preserved 3000-year-old mummies began appearing in a remote Taklamakan desert. They had long reddish-blond hair, European features and didn't appear to be the ancestors of modern-day Chinese people. Archaeologists now think they may have been the citizens of an ancient civilization that existed at the crossroads between China and Europe. 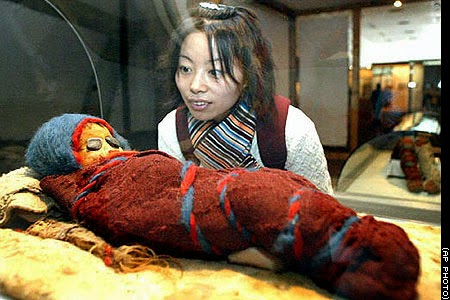 Victor Mair, a specialist in the ancient corpses and co-author of "Mummies of the Tarim Basin", said:"Modern DNA and ancient DNA show that Uighurs, Kazaks, Krygyzs, the peoples of Central Asia are all mixed Caucasian and East Asian. The modern and ancient DNA tell the same story."
The first Tocharian Nordic mummy found in 1989: a White female with long blond hair, finely preserved by the arid desert atmosphere of the Taklamakan desert. Based on her partially dismembered limbs and gouged out eyes, archaeologists believe she was a sacrificial victim   The discoveries in the 1980s of the undisturbed 4,000-year-old "Beauty of Loulan" and the younger 3,000-year-old body of the "Charchan Man" are legendary in world archaeological circles for the fine state of their preservation and for the wealth of knowledge they bring to modern research. In the second millennium BC, the oldest mummies, like the Loulan Beauty, were the earliest settlers in the Tarim Basin.
Meanwhile, Yingpan Man, a nearly perfectly preserved 2,000-year-old Caucasoid mummy, discovered in 1995 in the region that bears his name, has been seen as the best preserved of all the undisturbed mummies that have so far been found.
Yingpan Man not only had a gold foil death mask -- a Greek tradition -- covering his blonde bearded face, but also wore elaborate golden embroidered red and maroon garments with seemingly Western European designs.
His nearly 2.00 meter (six-foot, six-inch) long body is the tallest of all the mummies found so far and the clothes and artifacts discovered in the surrounding tombs suggest the highest level of Caucasoid civilization in the ancient Tarim Basin region.
One of the most famous Tocharian mummies found, the so-called "Beauty of Loulan"; and down, her face as reconstructed by an artist.
"Beauty of Loulan" 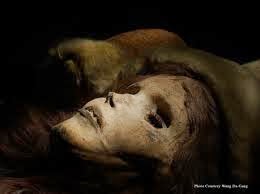 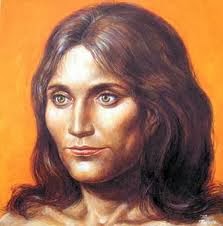 The oldest mummies found in the Tarim Basin come from Loulan located at the east end of the egg shaped Taklamakan Desert.
Dressed only in shades of brown, she was alive as early as 2000 B.C. during the era of Abraham and the patriarchs. She died when she was about 40. Next to her head there is a basket which contains grains of wheat.
A Tocharian man with red-blond hair; his clear European features still visible after nearly 3,500 years in his desert grave in Taklamakan. This mummified man was approximately 40 years old at the time of his death. 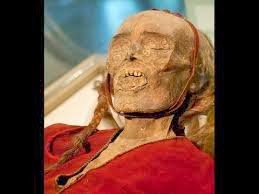 Mair had encountered the Cherchen Man, one of dozens of 3000-year-old Caucasian mummies to have been unearthed in remote parts of the Tarim Basin in what is now the Xinjiang region of China. The fact that the remains of people of Indo-European origin could be found so far east flew in the face of received wisdom about the lack of cultural exchange between early European and Chinese populations. Equally amazing was the fact that the mummies had withstood the rigours of time so well.

Seeing the photo at the beginning certainly someone would believe that it is the mask of the Janissaries in Naoussa, Greece (look at pictures below...)
Yet it is a death mask man in grave found in the desert Taklis McCann in China today in the province Xinjang.
The strange thing with this mummy (and hundreds others) dating from 450 BC up to 1800-2000 BC, is that they are people with European features, while his clothes has evidence from the Greek culture.

According to the record of Chinese historian Sima Kian, Emperor Wu decided in 138 BC to send its ambassador Zhang Kian people to the West, looking for allies against the Huns. He, after his unfortunate arrest and captivity ten years in the hands of the Huns, escaped and crossed the Taklamakan desert to meet ... the "Ntaiouan" (Danaeans-Greek race).
They were white with no slanted eyes and had beards! They were wonderful horse breeders, had very beautiful buildings and statues, allegedly with respect to women and... the listening. The site had 60,000 families and 30,000 soldiers. Based on the coordinates that gave Zhang Kian in the petition, the town was encountered Alexandria extreme, limits Ferganas and Sogdia, the passage of Pamir. 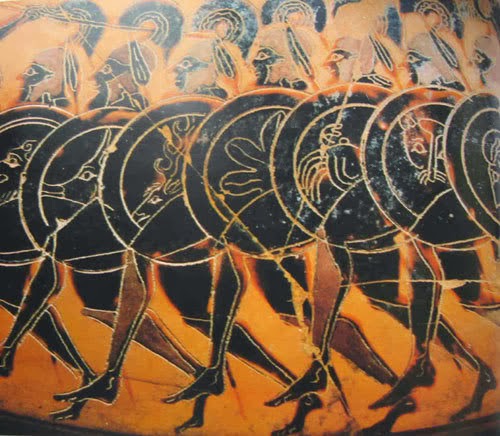 The very strange thing is that the city had already minted coins with a technique known only to the Chinese. Specifically, kings Pantaleon and Agathocles of Bactria had circulated -around 170 BC. The first western currency "white copper" (Copper- nickel ratio of 75/25).
Obviously, these people had a way to make imports...

Zhang went to Bactria, and reached as far as India. He returned - after another captivity in the hands of the Huns - and informed the emperor that what he saw was miraculous. The emperor was primarily interested in purchasing horses from the Greeks, but along with this bargain began the famus road from the East Asia to Europe, which in the 19th century, was baptized by the German scholar von Richthofen "Silk Road".
Greeks replaced then the Scythians, who pressed by the Huns invaded Bactria and India to create his empire Kousas until the area was occupied by China (70 AD). The caravans were leaving China with silk, ceramics and iron and returned with gold, ivory and glass objects.
However, attacks by bandits were common. For the protection of trade, the newly expanded Great Wall west as the Taklamakan desert.

The mummies that were discovered, create a political issue in the area, since in the past, residents had asked for their independence, arguing that they are Chinese.
The survey results indicate that they may be right.

And now some traditional clothing and people in Naoussa, Greece and compare by yourself... 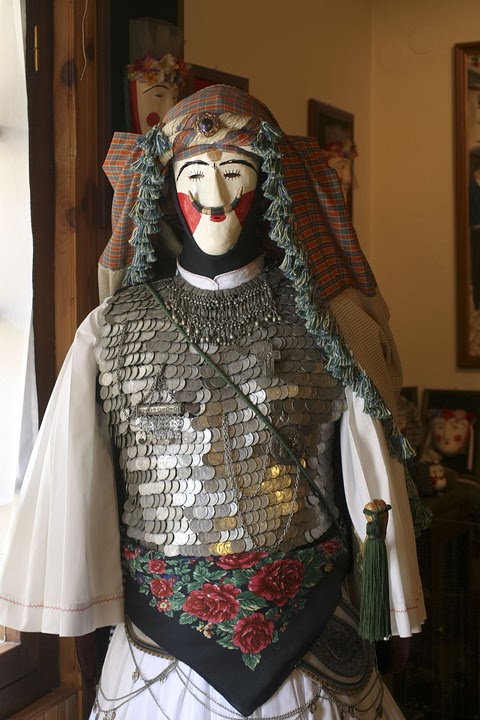 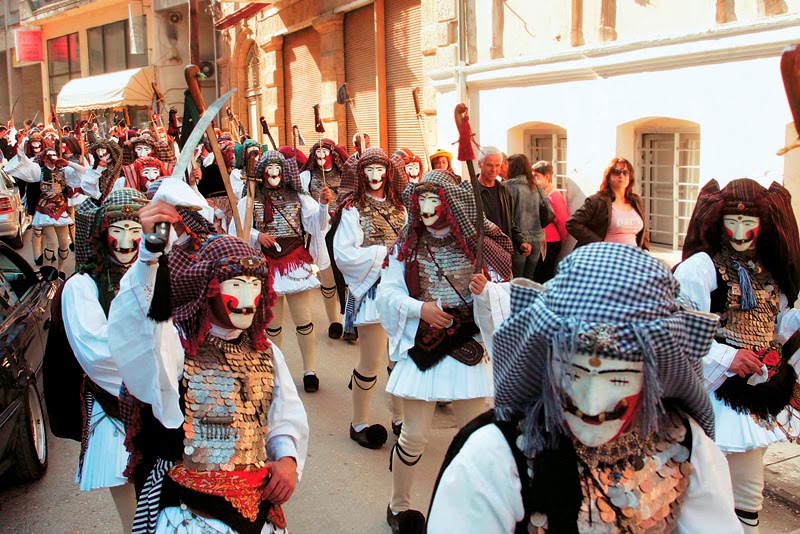 Email ThisBlogThis!Share to TwitterShare to FacebookShare to Pinterest
Ετικέτες THE EL ARE EVERYWHERE, VIDEO